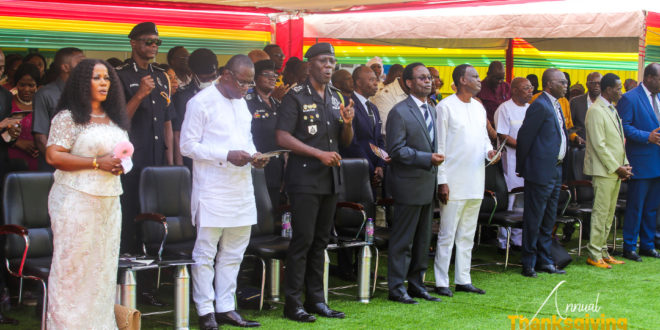 The Inspector General of Police (IGP) Dr George Akufo Dampare has urged Chairman of JOSPONG Group of Companies, Dr Joseph Siaw Agyepong, to look beyond the challenges and criticism the companies faces and stayed focus to provide developmental solutions to the nation problems.

The IGP made this call when he joined the JOSPONG Group of Companies to praise God at its annual Thanksgiving Services on Friday, December 9, 2022 at Nmai-Dzorn near Ashaley-Botwe in Accra.

Speaking as the Guest of Honour on the theme “Celebrating God Goodness,” Dr Dampare charged the Chairman of JOSPONG Group of Companies to dust of unnecessary criticism and remain focus in whatever he is doing to bring the ultimate needs of the country.

While commending the JSPONG GROUP for the effort made over the years to bring innovative developmental intervention and continue to dedicate his work to God, the IGP decried the failure and laxity of Christians to turn what he termed ‘theoretical Christianity’ into practicality.
He said the principle of commitment to God held on for many years has not only propelled Dr. Agyepong to just a praying Christian but has transformed that into beneficial productive ventures, saying, “We have come very far.”
Dr. Dampare found it very difficult to understand that with a total percentage of 70% Christians in the country, Ghana has remained the way it is.

He bemoaned the fact that there was a growing interest amongst Christians who would only seize any moment in the church against turning theory into producing goods.
He said theoretical Christianity has accounted for the country’s current state in the scheme of world developers.

He indicated that Ghana’s stance as a consumption nation has done no good to her, especially when countries Ghana began with have progressed in terms of development.
He decried why citizens have dwelled on the theoretical aspect of Christianity to retarding both personality and the nation at large.
The IGP indicated that, that situation has taken the best part of the individual to the detriment of future generations. 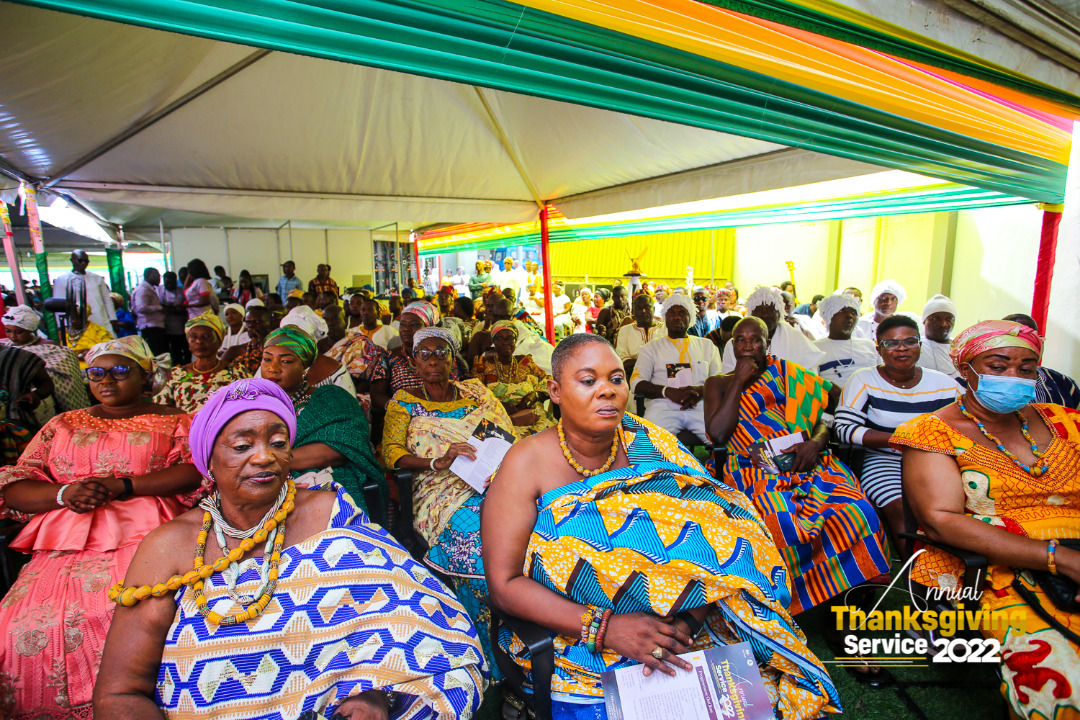 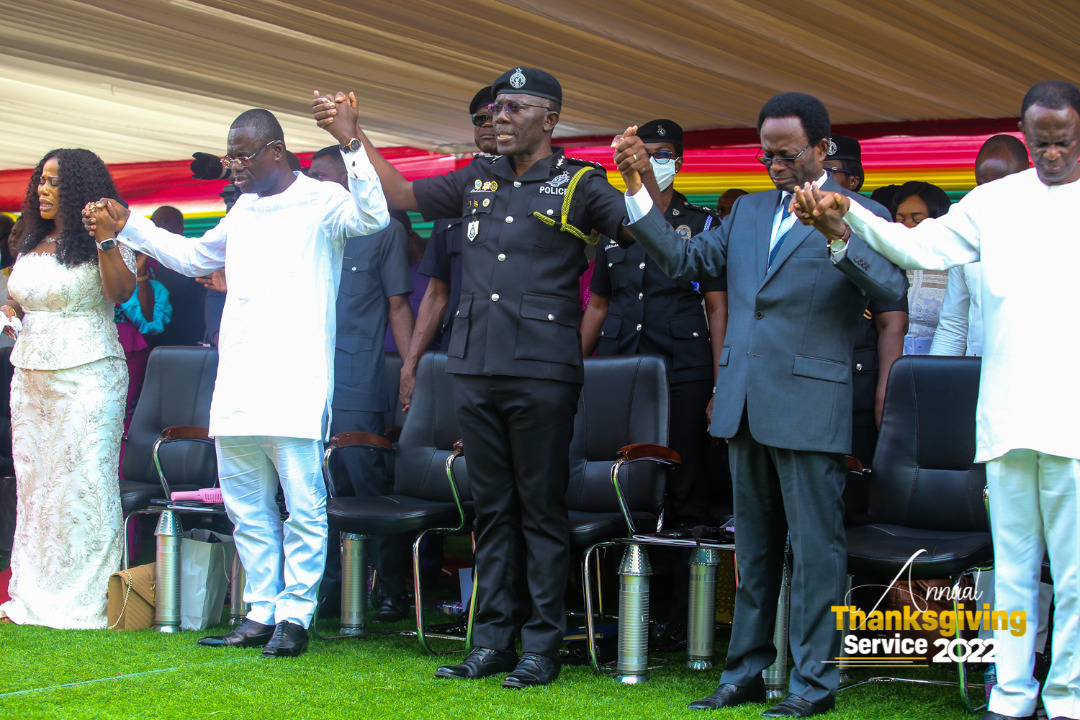 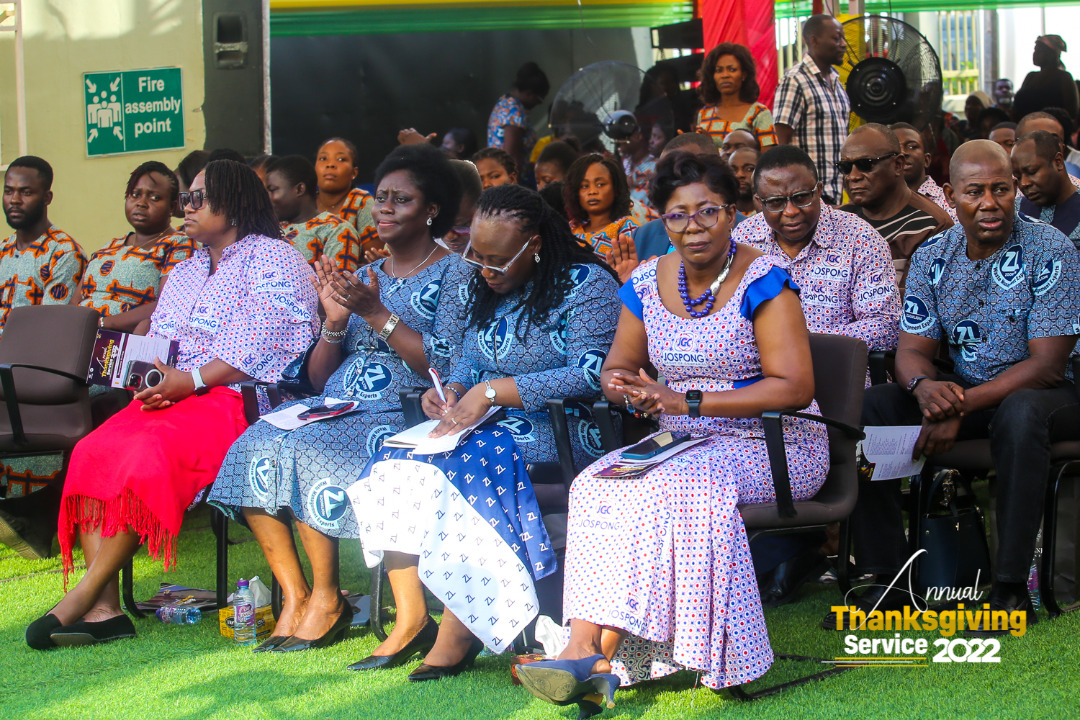 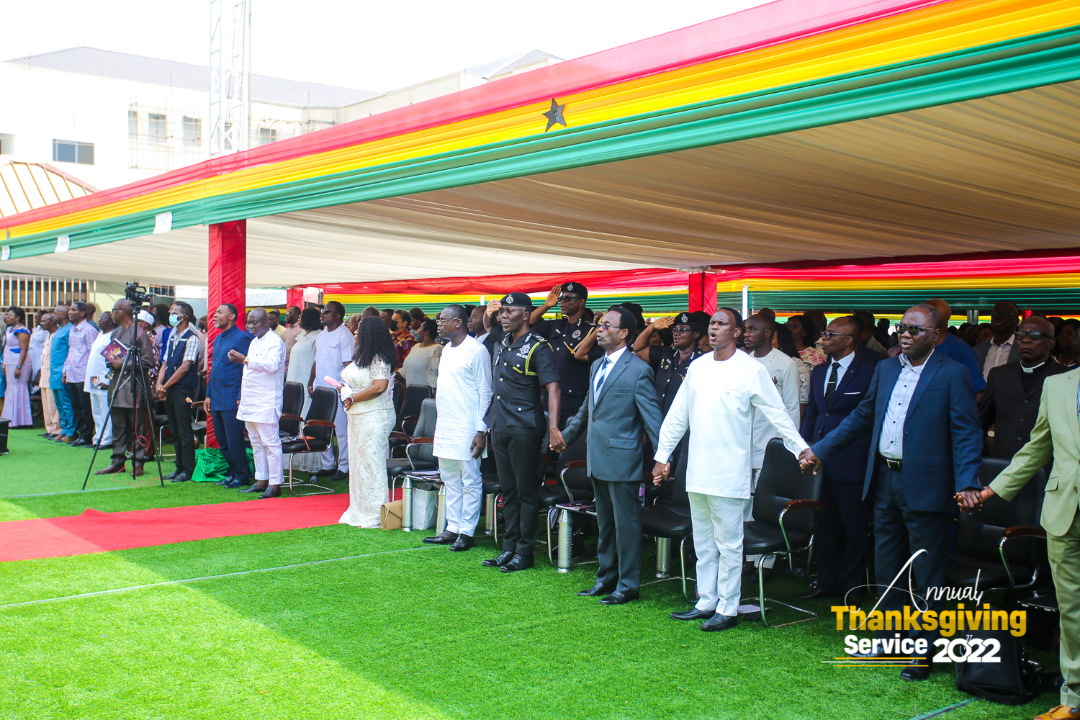 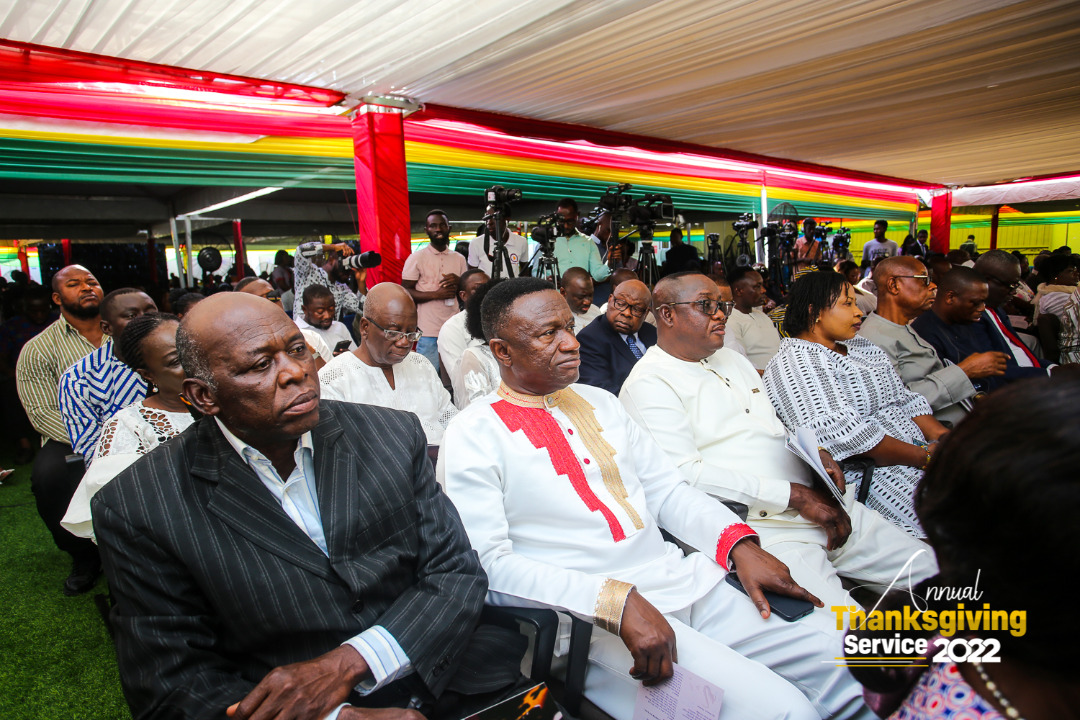 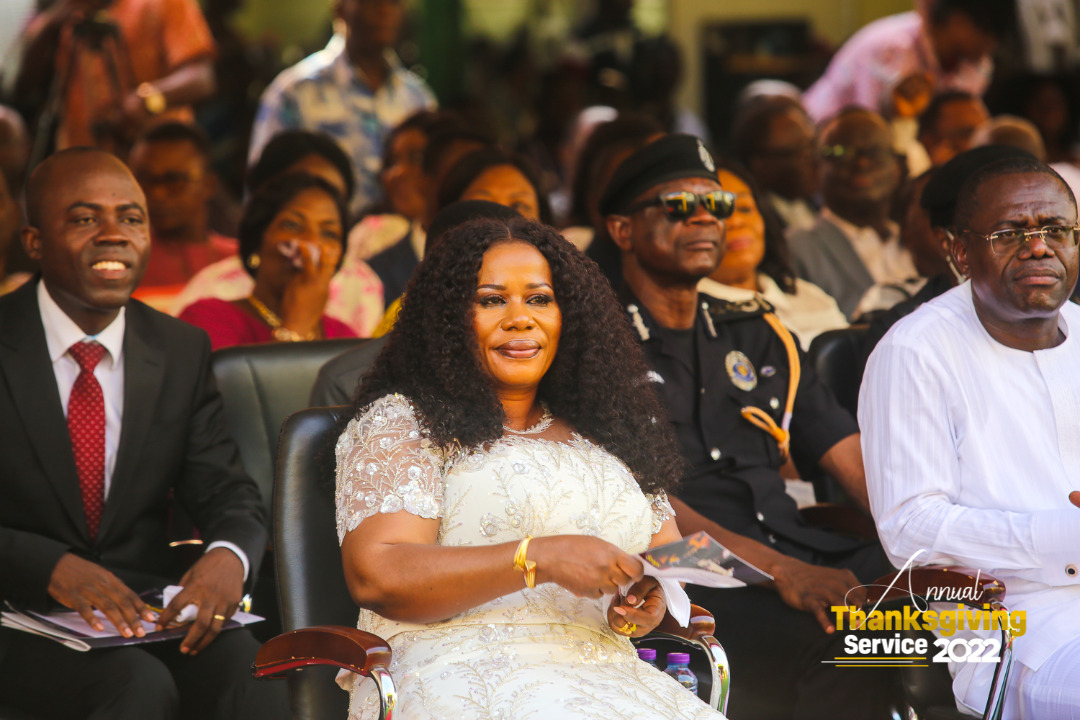 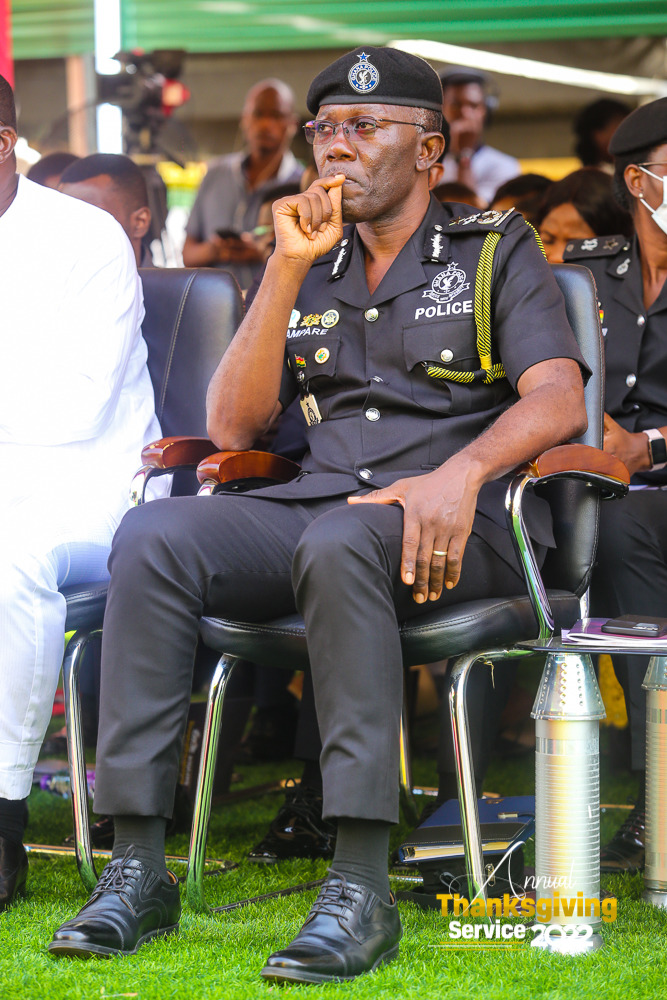 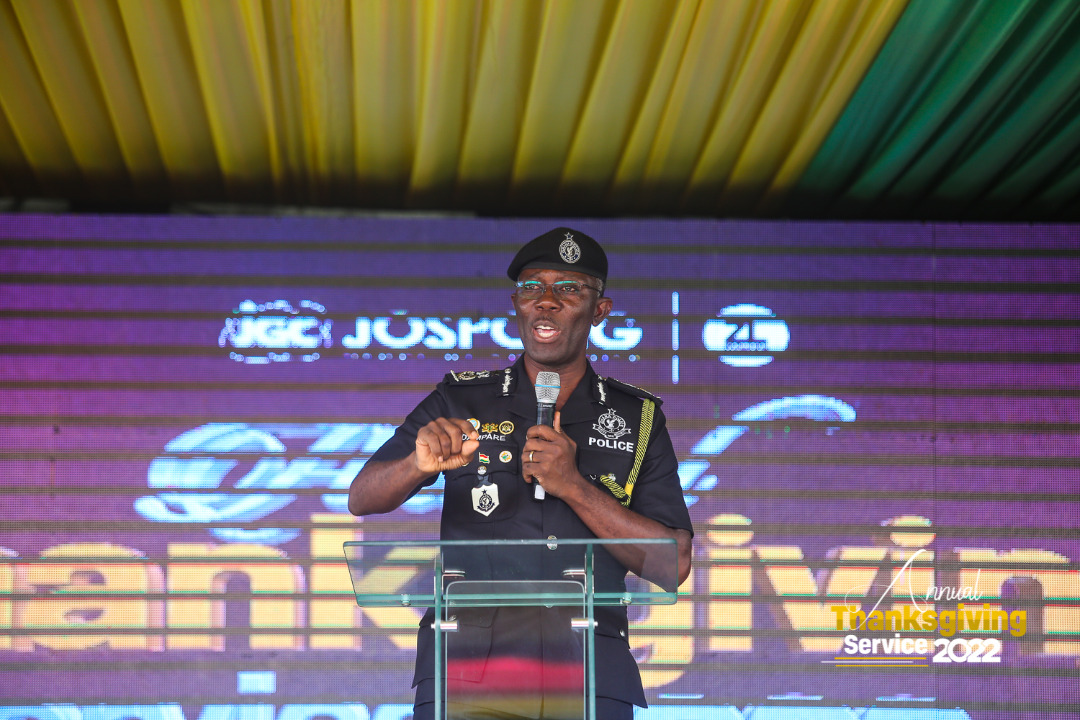 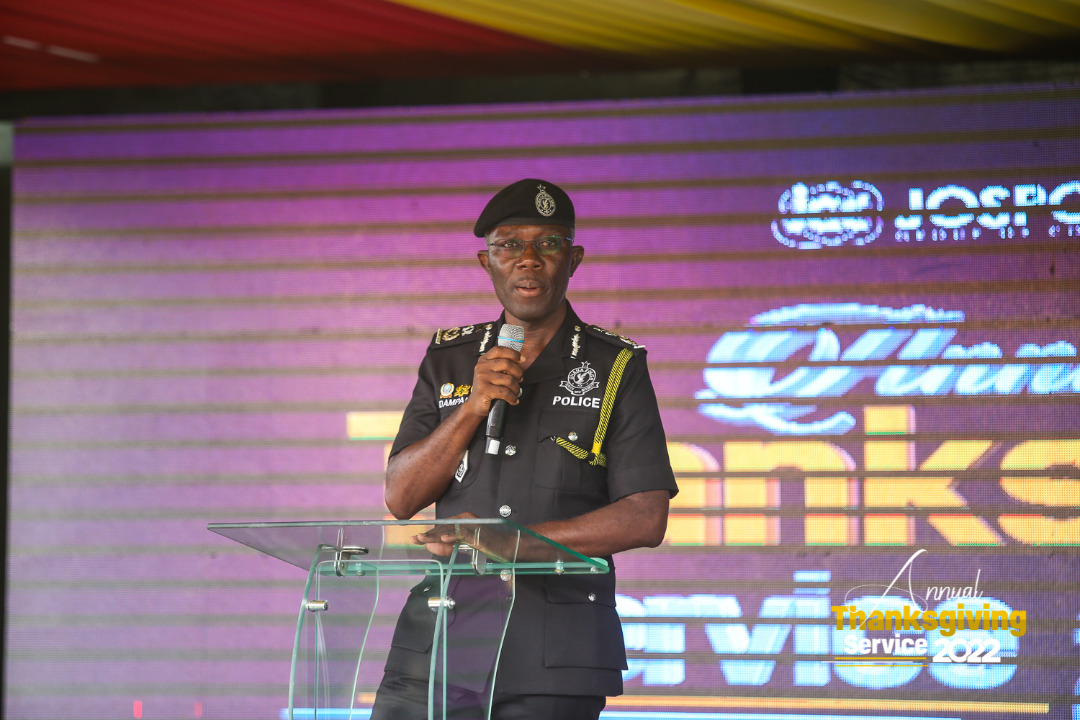 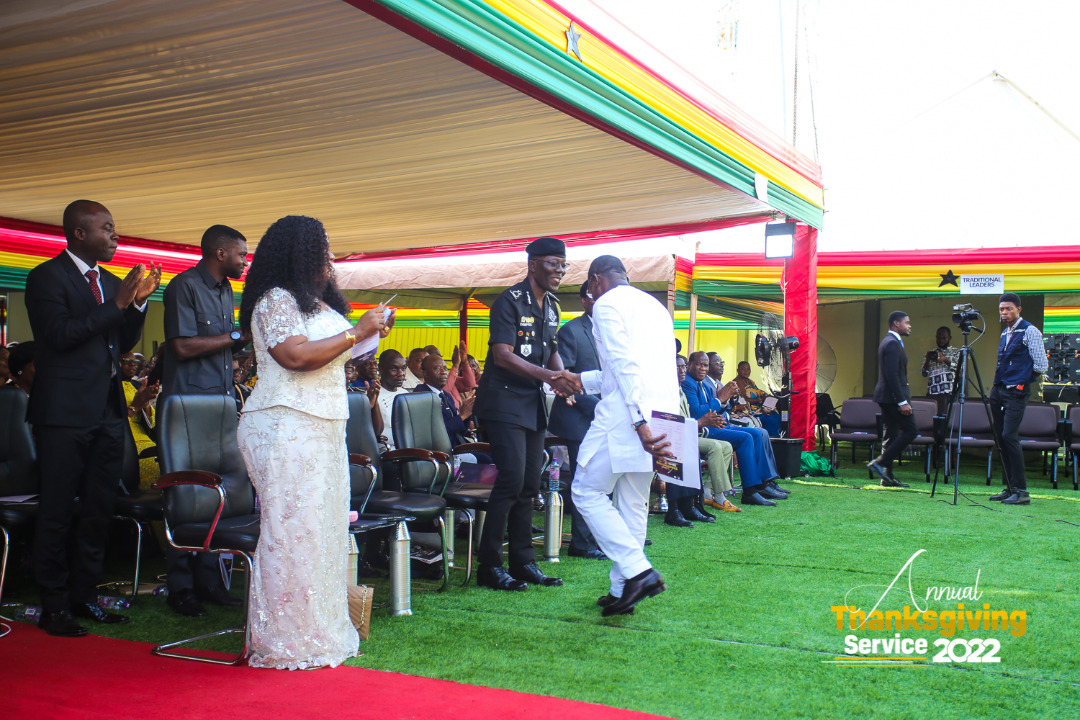 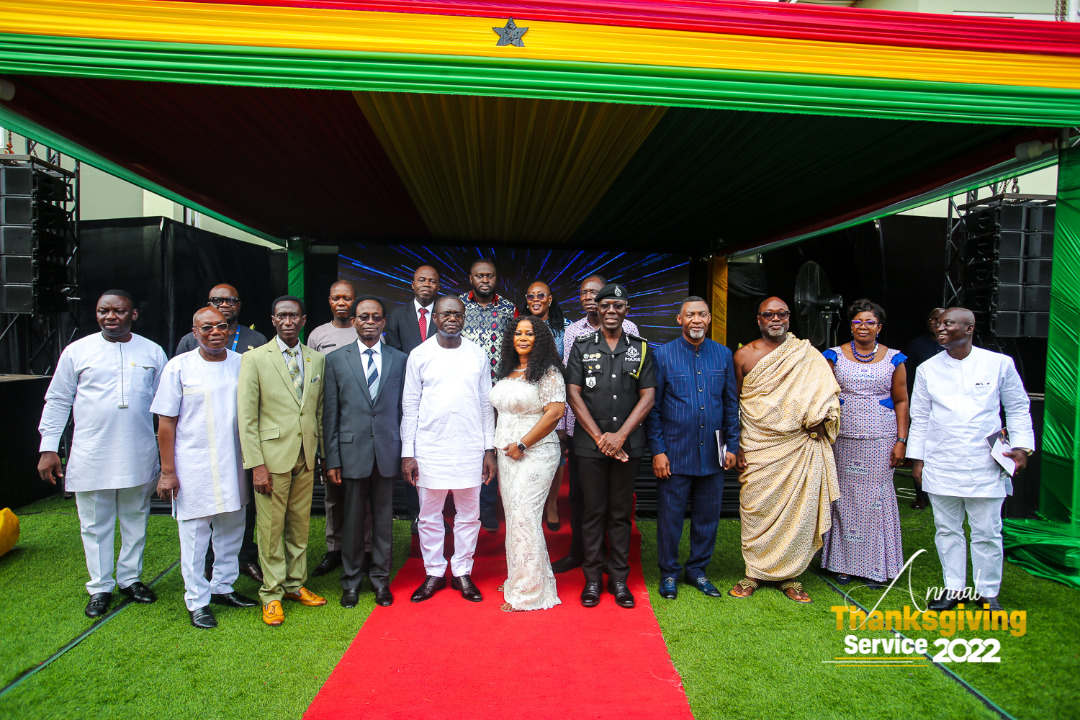 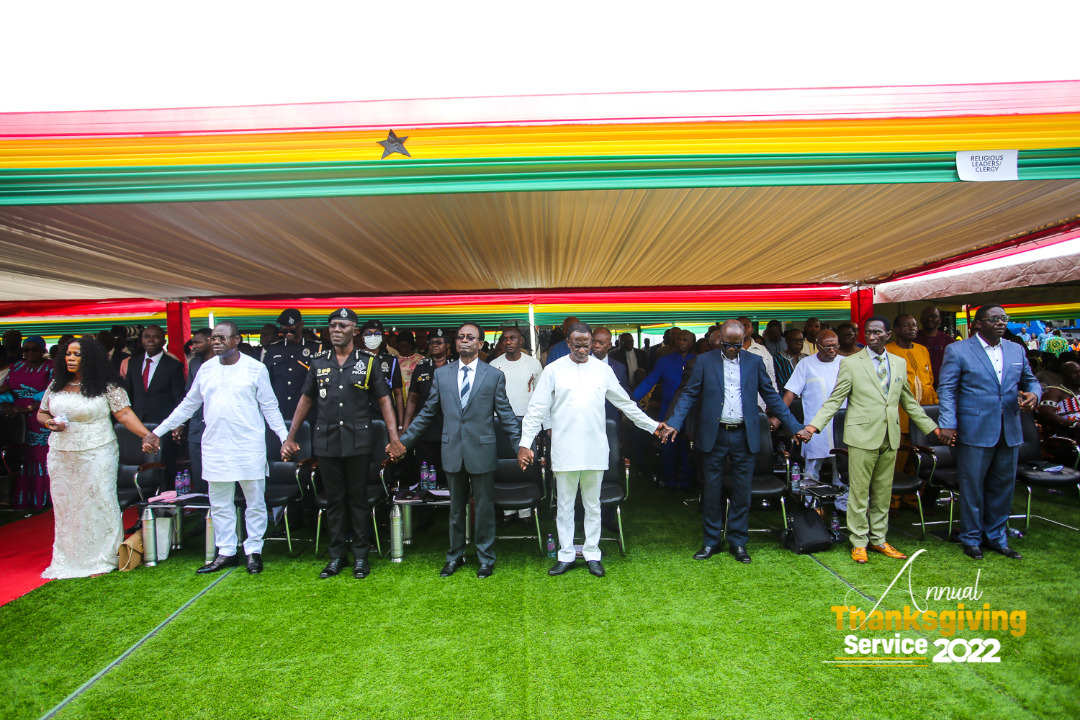 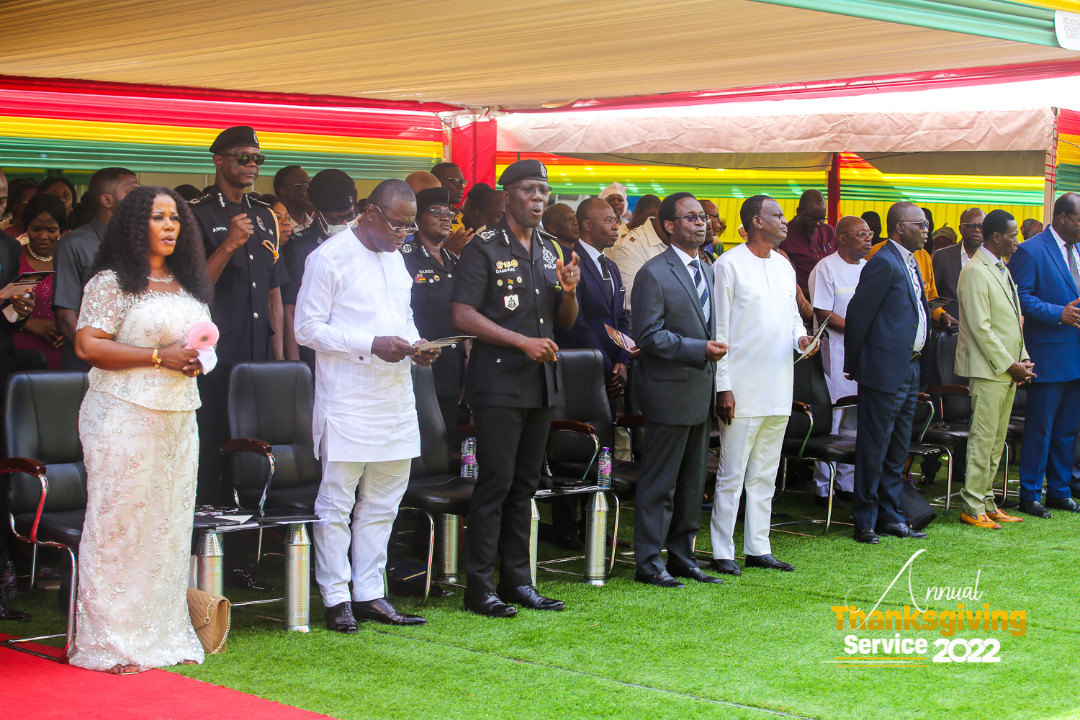 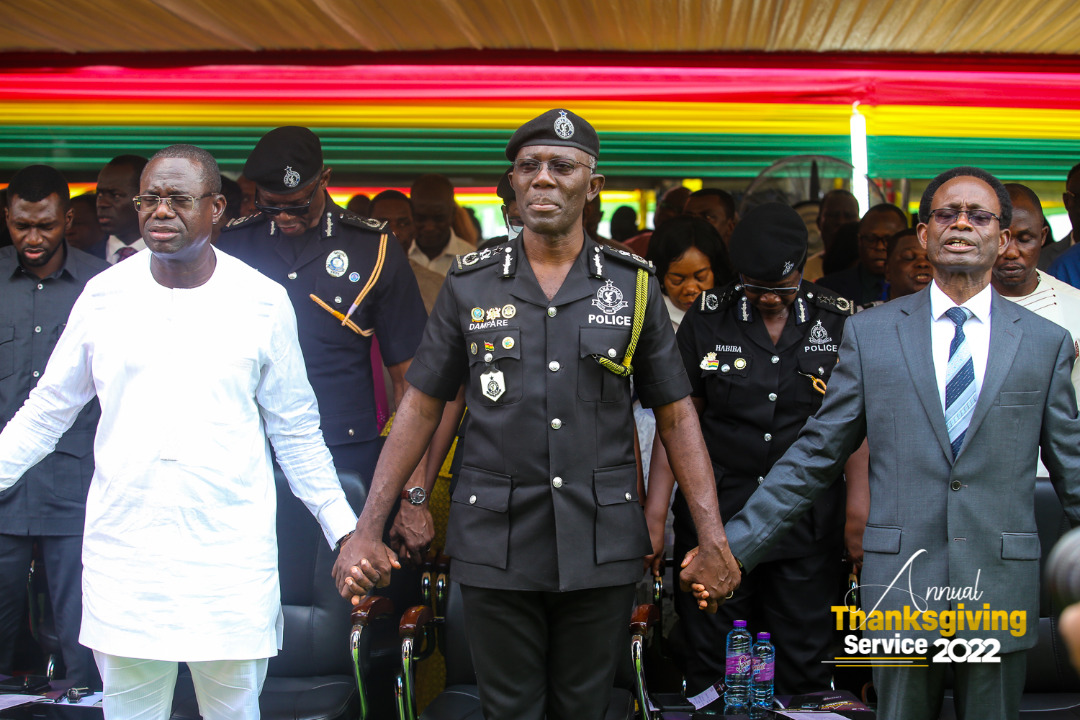 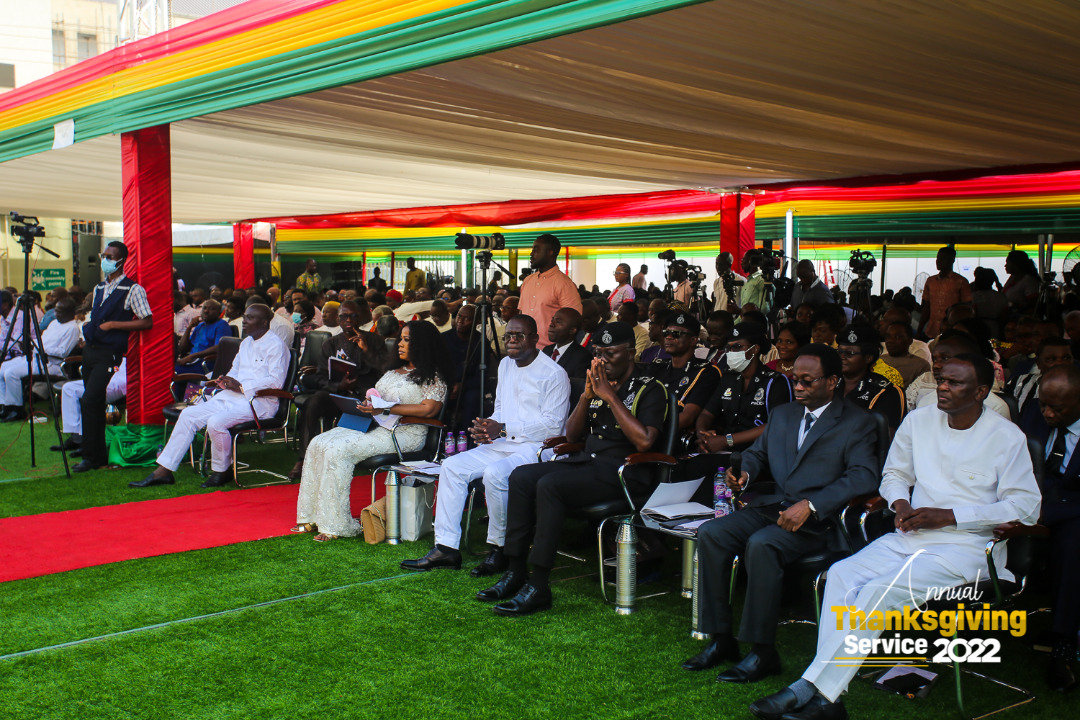 “If after prayer, you can think about eating, then it means everything is not prayer”, Dr. Dampare stressed.

The week-long thanksgiving service is on the theme: “Celebrating God’s Goodness” and was centred on Psalm 66:16.

The event attracted special personalities including the immediate past Chairman of the Church of Pentecost, Ghana Apostle Professor Opoku Onyinah, the immediate past General Secretary of the Church of Pentecost, Ghana Apostle Dr. Alfred Koduah (rtd), Inspector General of Police, with Dr. George Akuffo Dampare, as the special guest of honour and his entourage, past and present Members of Parliament, chiefs and queen mother’s amongst others.
The Executive Chairman of the JGC,, Dr. Joseph Siaw Agyepong, used the opportunity to thank everyone who sympathised with him during the demise and burial of his late father.

But making a statement on the current challenges that have bedeviled the country with its corresponding harsh economic challenges, he assured Ghanaians that with a committed attitude, the fortunes of Ghana could be turned around.

In reference to the cost of fuel which impact spares no facet of the economy, he believed that the future was bright regardless.
He said the current situation should spur the country to do more with home-grown policies while completely curtailing the appetite for excessive importation.

Previous Meet the lady with two vaginal canals, cervixes and wombs
Next Do not take loans from these 19 institutions – BoG cautions