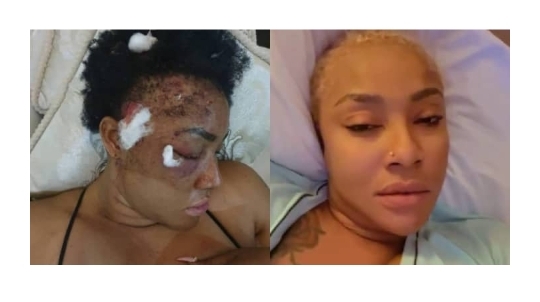 PHOTOS: Five celebrities who were shot multiple times but survived

Getting shot is one of the most common ways people die. A single gunshot can end a life, yet some Nigerian celebrities have survived multiple bullet wounds to tell their tale.

This piece is to bring to light the plight of five renowned persons in the entertainment sphere who, but for the grace of God, would have been long forgotten.

Nollywood actress Angela Okorie in July of this year recalled her close brush with death that occurred in 2019 when she got shot by alleged assassins. Thinking back on the day, Angela wrote on her Instagram:

Undiluted grace will never stop to exist in my home, 10 bullets were removed from my head and 2 bullets close to my eyes, God alone deserves all the glory and honour. You are God all by your self, I am a child of Grace.

Thank you, lord. Nothing in this world will ever make me ungrateful for all you’ve done in my life and family. The assassins kept on shooting for 30 minutes, No help from anywhere, No human came for our rescue Only God came for our Rescue #epaindem #protectmelord.

They wanted me damaged but God remolded me 🤪 E come pain dem more 😂 see there are people you touch by mistake you die by Correction, I Dey run my race oooo make you run your race too☝️Sooooooo No hating No discriminating No intimidating No reason to hate me 🤷‍♀️ The second slide will never show I have pellets on my head but it is what it is But to the glory of God I live and even better God is God 🙏🙏🙏🙏🙏🙏#legitqueen

Another Nollywood actor who survived multiple gunshots to his person is none other than actor Charles Okocha popularly known to many as Igwe 2pac.

In 2015 the actor was hit by stray bullets – five in his stomach and one on his leg, a horrible incident that could have easily ended his life. However, after an extensive surgery, doctors were able to remove all the bullets successfully and saved his life.

Scar right there is the sign of six bullets I had 2015 now I look at myself and have a reason to thank God.

Nigerian singer and provocateur Maheeda is another celebrity who has survived getting shot. Taking to her Instagram, Maheeda chronicled the incredible story of how she was shot and helped by a little girl. She said:

About 10 years ago when I was still living in Nigeria, I went to visit a friend of mine. Reaching his House I saw a sick girl outside on the floor helpless. I asked what’s wrong they said she is sick but no money to take her to the hospital.

I went inside the room but couldn’t stay knowing that child reminds me of me being kept outside for my body to heal itself because we had no money for hospital. So I came out gave them money and asked them to take the Child to the hospital immediately!!! . They called me that evening that the child has been admitted in the hospital as soon as they reached. They thanked me and off the phone…..

Three days latter while I was coming back from the club, I was attacked by gun men who shot at my car and a bullet hit me. The bullet went through my nose and stayed right where you can see on the scan pictures I just posted. And a big piece of glass went into my neck too as u can see on the scan pictures.. we went to 2 hospitals that night only the 3rd accept me.. they were scared I will die on them. I was bleeding like hell… I was coughing out glasses and blood which made me ask the nurses if I will make it. I’m a strong woman but for the first time in my life I asked someone if I will survive!!!!! But I did anyway????????

The next day the little girl I helped called me from her own hospital bed to tell me she prayed for me that her brother told them immediately I was shot to pray for me and she did.. that I shouldn’t worry nothing will happen to me!!! We both recovered and here I am today telling the story… so now if I say thank God for life, you will feel me better .. I am 35 years today thank God for life???? and don’t forget to be good to people, you might just be saving your own life/future!!!!

Upcoming Nigerian singer Pop Geezy escaped death after a police officer accidentally shot him in the chest while he was in Abuja. Taking to Instagram, Pop Geezy shared the picture with a caption that read:

Thank God for my life I was mistakenly shot by the police yesterday on my chest. Lord am grateful that I survived the bullet.

Nigerian icon 2Baba is the last celebrity on our list. The talented singer was shot a whooping 22 times and miraculously survived all 22 bullets. The incident happened on Thursday, October 4, 2007 when 2Baba along with his brother, Ifeanyi Odogwu, and friends including singer Faze where attacked by gunmen in their car.

After the horrific incident, 2Baba was rushed to Cedar Group Hospital in Festac Town where he underwent surgery to remove all 22 bullets from his body.

Wow! To be shot and still alive to tell the tale, now that is something to be incredibly thankful for.