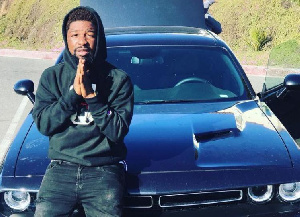 Philadelphia Police release video of how Junior US was killed

The Philadelphia Police Department has released footage of how a Ghanaian, Nana Yaw Opoku, popularly known as Junior US was shot dead in his home in the United State of Ameria (USA).

In the 3 minutes video, Junior US who is said to be the friend of self-acclaimed dancehall king, Shatta Wale, is seen to have been set up three black ladies before he was murdered.

One of the ladies was seen talking to the killers at the entrance, and when Junior tried to find out who that was they forcefully entered the house and shot him.

The footage showed the three ladies leaving with the killers after they had committed the murder.

Previous My manhood didn’t work for a while after my madhouse documentary – Anas Aremeyaw Anas
Next Martin Amidu’s 26 list of cases authentic; he will strike soon – Baako