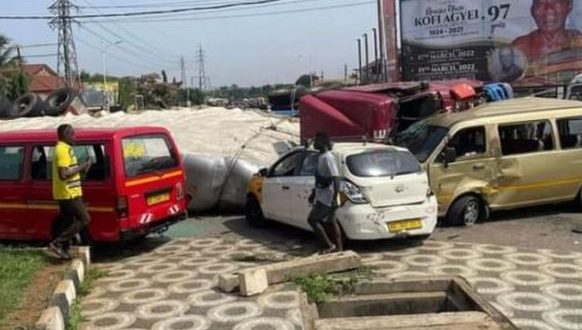 The trailer is said to have failed when it was braking but managed to control the steering until it rammed into Airport Roundabout.

According to an eyewitness, the trailer driver intended to use the Roundabout as a guard to avoid injuring others.

But instead of reversing, the trotro and taxi drivers decided to cross quickly and were caught up in the accident.

The injured, including the driver of the trailer, are receiving medical attention at the Komfo Anokye Teaching Hospital and Manhyia Government Hospital.

Some air passengers missed their flight for the hour as they got stuck in heavy vehicular traffic on the Aboabo-Airport Roundabout stretch as well as other link roads.

Police later managed to clear the vehicles off the road to ease traffic.

“After clearing the road, we will investigate the exact cause of the accident,” said Airport MTTD Commander, ASP Frederick Oppong Egyire.