Home / GENERAL NEWS / Over 600 residents at Ayensuano displaced by rainstorm 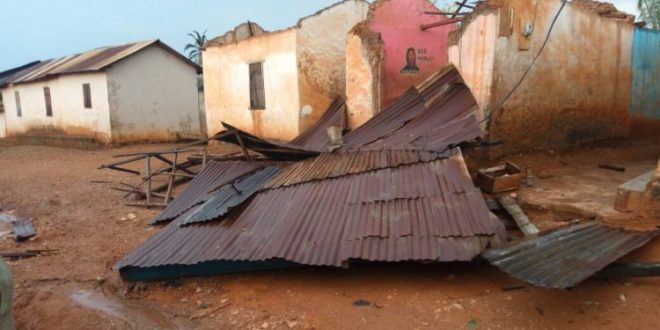 Over 600 residents at Ayensuano displaced by rainstorm

About six-hundred (600) residents in Ayensuano District of the Eastern region have been displaced by a devastating rainstorm that has struck some communities.

A 13-year-old girl hit by a flying object at Kofi Pare fell unconscious but regained consciousness after she was attended to by health workers at a CHPs compound in the community.

According to the Ayensuano District Director of the National Disaster Management Organization, NADMO, Joseph Okai Gyan, the incidents occurred on April 21st and 26, 2020.

He said extensive assessments have been done and a full report sent to the Regional Directorate of the Organization.

“We have completed assessments in the various affected communities and we have sent our report to the Regional Director, Kwame Appiah Kodua, who is working on it to get relief items for the victims”

Meanwhile, the Member of Parliament for Ayensuano, Samuel Ayeh Paye has donated 500 bags of cement and 40 packets of roofing sheets and nails to the victims of the first incident.

The MP has promised to Mobilize enough resources to aid the others but appealed to NADMO to also facilitate relief support for the victims.

According to the MP, most houses in the communities are old buildings which require renovation to minimize vulnerability to rainstorm and windstorm disasters.

He also encouraged the residents to plant trees in the community to serve as windbreakers.