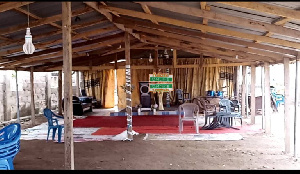 Salomey Bensah, wife of Prophet George Bensah, who said she was stripped naked by ushers in church, says she still loves her husband despite the incident.

Speaking in an exclusive interview on Adom FM’s morning show Dwaso Nsem Thursday, a sobbing Mrs Bensah said she tried to stop her husband’s wedding after another man of God gave her the tip-off.

She explained that her reason for moving out of her matrimonial home was because she suspected her husband of having an affair.

“My husband one time travelled to Koforidua for a programme, he went out with just jeans and a shirt. When going for the programme he didn’t tell me, but later called me one dawn to tell me of his journey to Koforidua. He returned four days after, only to tell me he no longer wanted to stay married to me and wants a divorce,” she said.

She said she was not happy with her husband’s decision to call off the marriage.

“I was saddened when my husband demanded for a divorce, I knelt down and begged him to change his mind but he never listened and insisted that he wants a divorce, I even invited some elders to come plead on my behalf but he ignored them,” she cried.

She said that her husband’s demand for a divorce was because of his plan to get married to one Rose Coffie, a woman said to be a prophetess.

“When I heard about my husband’s marriage, I went to report it to the Domestic Violence and Victims Support Unit, I was then requested by the police to obtain evidence of the marriage between my husband and Rose Coffie. And that was my mission in the church on that day, only for me to be humiliated by the ushers in the church,” she said.

Mrs Bensah is believed to have been stripped naked by ushers of Peniel Word Ministry church at Kasoa Samanhyia in the Central region for trying to stop Prophet George Bensah, her husband from marrying another woman.

Mrs Bensah insists she is married to Prophet Bensah and loves him as a married woman would love her husband.

They have been married for 12 years with three children.