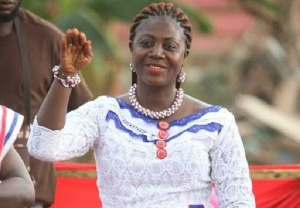 Member of Parliament (MP) for Akwatia, Mercy Adu Gyamfi, known as Ama Sey has revealed that the Okyenhene, Osagyefuo Amoatia Ofori Panin II prevailed upon her to withdraw from contesting as an independent candidate.

Following her failure to file her nomination forms last week, rumours were rife as to whether or not she had changed her mind voluntarily. So she clarified what had happened at she said at a press conference last Friday at Akwatia.

She said that her decision to go independent after her loss at the NPP primaries was as a result of the NPP’s failure to do recounting for her after she had petitioned them.

“I petitioned the NPP for recounting after the primaries, but they ignored it. However, they did recounting for a candidate at Asamankese. My supporters got angry and decided to support me to contest as an Independent Candidate…the party was not fair to me.

My supporters were angry. I agreed to go Independent because I was bitter. however many people called me,” she disclosed.

She explained that many notable and highly influential persons including the President himself beseeched her to rescind her decision to go independent.

“President Akufo-Addo called me. His wife called me. Chief of staff called me. Okyenhene, Juaben Chief, Pastors and many other dignitaries called to speak to me. So I have decided not to file my nomination form as EC closes filing today,” she explained.

She added that even though she has decided to not run as an independent candidate, she is pained that she was cheated and denied justice.

“It is painful to be cheated. And if pains are afflicted on you and you don’t take the decision to prevent it, it will continue. But because I have been spoken to, I have decided to remain calm and rescind my decision. I know many are still angry in Akwatia. I beg them to let bygones be bygones,” she noted.

The MP won the parliamentary seat in 2016 but lost in the 2019 primaries under controversial circumstances.

Previous Don’t politicize death of Mfantseman MP – Former C/R Minister
Next Covid: Trump ‘no longer a transmission risk to others’