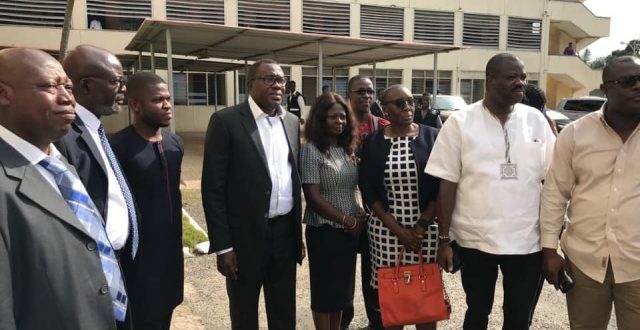 Former Attorney General, Marietta Brew Appiah-Opong and private legal practitioner Tony Lithur, on Monday, 4 March 2019 accompanied the National Chairman of the National Democratic Congress (NDC), Mr Samuel Ofosu-Ampofo to the headquarters of the Criminal Investigations Department in Accra over the probe into the leaked audiotape saga.The National Communication Officer of the NDC, Mr Sammy Gyamfi and other NDC stalwarts are with Mr Ofosu-Ampofo at the CID headquarters.The CID requested to meet Mr Ofosu-Ampofo in connection with the tape, which captures a male voice purported to be his, urging communicators of the party “to wage a relentless war” against the Chairperson of the Electoral Commission, Mrs Jean Mensa; “insult” the Chairman of the National Peace Council, Rev Prof Emmanuel Asante and use “tactical” means to put fear in some Ghanaians by letting them know that “their lives are in danger” in the lead-up to the 2020 polls.Last week, while speaking to party supporters after a Victory Health Walk in Accra, Mr Ofosu-Ampofo assured the supporters of the party that he would honour the invitation.He said: “I want to assure you that the NDC Chairman has not run away from anybody. When we finish thanking God on Sunday, on Monday, our lawyers have informed the CID that the National Chairman of the NDC will come to the CID headquarters to answer any questions that they want. By eight O’clock, we are there and, so, I want to assure them that the peaceful Chairman, the peaceful party will respond to their call even though they first invited us through WhatsApp”.According to him, the NPP “cannot sleep” because they know the NDC has “a Chairman who is a peaceful person, a Chairman who is reconciling his party and bringing his party together in unity to win 2020”.“Less than three months ago”, he told the crowd of party supporters, “You elected me as the Chairman of the party. Now the NPP has organised a press conference asking me to resign. I want to assure you that I am a man of peace, and my hands are clean. I have been in politics for many years, there’s no evidence I have won my victory through violence or spoken against anybody. I want to remain focused, the NDC wants to remain focused. We will win the election freely, fairly and clearly.“The NDC believes in the rule of law and we are Democrats. … I want to assure all Ghanaians that the NDC will not kill women to win power, the NDC will not kidnap people to win power, the NDC will not insult to win power, the NDC will bring a message of hope to Ghanaians”, Mr Ofosu-Ampofo noted.Source: Ghana/ClassFMonline.com