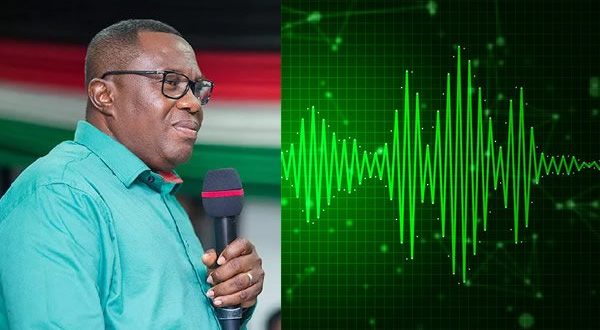 Chief Inspector Bernard Berkoh, the case investigator, told an Accra High Court that he sent the audio for the examination after he had obtained a copy of the audio recording from an Accra radio station known as Adom FM.

According to him, when Ampofo was granted Police enquiry bail, he granted audience to some party faithful who had converged at the Criminal Investigation Department headquarters in Accra.

He said on the said day, TV3 captured same so he also went for that audio.

Part of the audio which was yet to be admitted in evidence, was played in court after lawyers agreed that it should be played and if they had any objection, they could do so.

However a few minutes have the audio had ended, the Director of Public Prosecution (DPP) informed the Court that the one played in court was the full audio hence she should be given to time to sort it out with lawyers on the case.

Led in evidence earlier by Mrs. Yvonne Atakora Obuobisah,DPP, Chief Inspector Berkoh said on February 27, last year, the Police had information that a meeting of NDC Communicators were held at the Party’s headquarters and Ampofo had made statement which had security implications.

After obtaining the audio recording and listening to it carefully, the third prosecution witness said, he recognized that it was the voice of the NDC Chairman and other party leaders.

According to the witness, he invited the two accused persons to the CID headquarters and when the audio was played to each one, they confirmed their voices on the audio.

However, the witness said the accused indicated that the said audio recording had been doctored.

The witness indicated that Kweku Boahen, deputy Communication Director, admitted that he was also present at the meeting.

Chief Inspector Berkoh said both accused persons indicated that the said audio recording had been doctored and that they wished to exercise their right to remain silent.
According to the witness, the accused indicated that in their various investigation caution statements which was obtained on March 5, last year.

Witness then tendered the accused persons’ investigating caution statements in evidence after their lawyers raised no objection.

National Chairman of the NDC and Boahen are standing trial for conspiracy to cause harm.

They have both denied the offences and been granted a GH¢100,000.00 bail with a surety each.

According to the Prosecution, the accused had been captured in an audio recording of the proceedings of a meeting on February 3, 2019, planning a road-map of criminal activities targeted at the Chairperson of the Electoral Commission (EC) and the Chairman of the National Peace Council, among others.

The meeting followed January 31, 2019, Ayawaso West-Wuogon by-election, which turned violent following a clash between some National Security operatives and supporters of the NDC suspected to be vigilantes.

The tape was played on some radio stations and according to the Prosecution, the Criminal Investigation Department of the Police Service intercepted it.

The Prosecution said Boahen had confirmed being at the said meeting and also confessed on a radio station that the information on the tape was true.