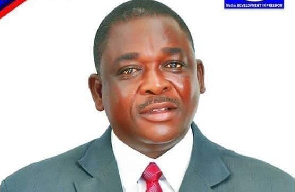 The 2016 parliamentary candidate of the New Patriotic Party (NPP) in the Kumbungu Constituency of the Northern Region has crashed a stationary truck to death, MyNewsGh.com has confirmed.

Iddrisu Muktaru popularly known as DEMS it is gathered, was returning from Kumbungu on Saturday night on a motorbike when he run into the truck that had been abandoned in the middle of the road without warning triangles.

He was said to have died on the spot and the motorbike damaged beyond repairs.

Family sources revealed that he was buried on Sunday February 10, 2019 in accordance with the Islamic custom.

His incident is one of the many accidents recorded in the area involving tipper trucks which has been a major source worry to city authorities over the wanton disregard for road traffic regulations by the tipper truck drivers.

It would be recalled that early this month, a Tamale-based Radio Presenter, Mohammed Shamsudeen Rufai popularly known as DJ Fabregas was also crushed to death by a tipper truck.

The late Mohammed Shamsudeen Rufai was on a motorbike with a lady believed to be his girlfriend who survived on New Year dawn at Lamashegu a suburb of the Tamale Metropolis while he was returning home after the launch of a music album by one Kasi Survivor when the incident happened.

The owner of the abandoned Tipper truck on the Kumbungu road which eventually cost the life of this fine soul must be prosecuted. I hope and pray, the Kumbungu District Assembly and the relatives of Dems will not live “everything to God”. 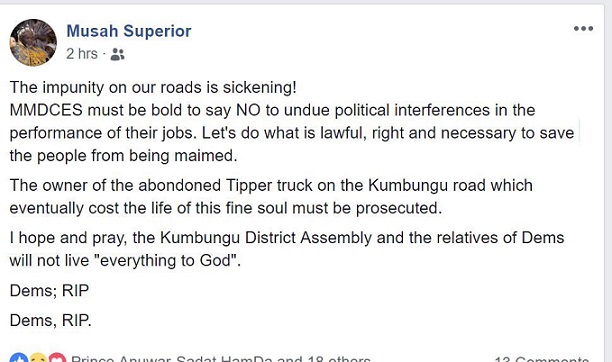 Previous Cancer Kills Liberian Senator At Korle-Bu Hospital
Next JHS, SHS leavers to get diplomas; undergrads to do 3years – Napo