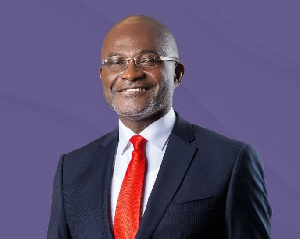 NPP flagbearership: Honest and courageous of Ken Agyapong beats all other aspirants

A group in the governing New Patriotic Party NPP, Ken ‘4’ President  says the current recession in Ghana’s economy demands an honest and disciplinarian leader in the shape of the Assin Central MP Hon Kennedy Agyapong to turn things around.

The group believes only the New Patriotic Party NPP have the capacity to stabilize the ailing economy but will need a courageous and honest person to make it happen.

According to the group, it will be in the great interest of the ruling NPP to elect Kennedy Agyapong as their next flagbearer, adding that the Assin Central’s MP beats all potential presidential candidates of the party with high integrity and honesty.

The group in a press release signed by its secretary, Kwadwo Owusu, copied to OTEC News desk on November 7, 2022, has therefore appealed to the members of the party to set aside any vested interest and bring Hon Kennedy Agyapong to save both Ghana and NPP.

“Collectively as a group, we need to recognize someone who is courageous , consistent  honest and strategic as key in our political struggles and we are confident that Kennedy Agyapong stands tall in the NPP fraternity ”

“The NPP will therefore need a grand strategy going into the 2024 campaign, and this will involve among other things, presenting to the Ghanaian voters a flag bearer who represents the needs of the electorate irrespective of their political affinity”

“If we are to achieve our much-touted dream of breaking the 8, the party needs to ask pertinent and thought-provoking questions, the answers to which, should guide it in selecting the right candidate for the flagbearer ship, that is why we are calling for the endorsement of Kennedy Agyapong as the next flagbearer of the great NPP”

Collectively as a group, we see Courage, consistency, and honesty as key, in our political struggles, either for good or bad, but the danger in the lifestyle of the courageously inconsistent and unrealistic individuals in our politics, soon fade off, leaving the few pragmatist with sound and coherent measures ready to set in motion, with amazing out-turn for the betterment of this country, in the final analysis.

And so, It is factually accurate and fair analytical submission, to submit that, Ghana has come to a sudden apparent inertial and general state of despondency, but there is a man with a compelling vision, comprehensive plan, relentless implementation and talented personalities available to push these ideas through instantly, to resurrect hope back into the system. No wonder KOA(Kennedy Ohene Agyapong) has consistently been flying around with his unchangimg courageous personality, coupled with his atypical concistency of performance to produce positive results for the upliftment of this country.

When the going gets tough and the toughness of the situation becomes worse, surrender and stop this needless oral masterbation and dissipation of funds, and join KOA to make us and Ghana proud, because,  what makes him exceptionallly unique, is his willingness to stick with a bold course of action and a mindset that refutes and rejects leadership to be

a popularity contest, but rather defines it as results not attributes.

In politics today, the choice is completely  yours, either keep your promises or do not make them at all, because, it is not what you do once in a while that shapes our lives but what you do consistently.

When a person is full of empathy, that is, having the agility to relate to, and connect with people for the purpose of inspiring and empowering  them, time becomes neutral and does not change things but, with courage and positive initiative, determined leaders change things to suit the order of the day, and that is the nature of KOA.

Ken ‘4’ president nationwide believes in Ken, and this is because, he has the natural tendency  of guiding people without force into a direction or decision that leaves them still feeling empowered and accomplished.