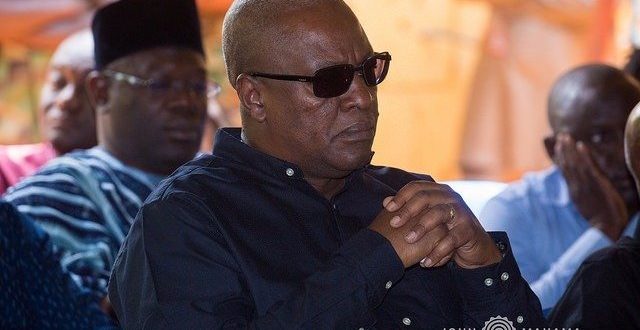 Former President John Dramani Mahama has condemned the recent spate of killings of police personnel in the country.

Two police officers, Sergeant Michael Gyamasi and Lance Corporal Awal Mohammed, were killed on Wednesday, 28 August 2019 by some gunmen while on duty on the Kasoa-Winneba road in the Central Region.

Three suspects have been arrested in connection with the murder.

In a Facebook post to commiserate with the families of the deceased policemen, Mr Mahama said: “Sad to learn, yet again, of the gruesome killing of two policemen in Kasoa. Our law enforcement officers are doing their best under very challenging circumstances to protect life and property. I, therefore, condemn the increasing spate of violence against them.

“May their families be consoled and may the perpetrators be brought to justice sooner than later. We must put in place stringent measures to help protect our men in uniform.”

The killing of Sergeant Gyamasi and Lance Corporal Mohammed brings to five the number of police personnel killed in a month.

On 30 July 2019, Corporal Agatha Nana Nabin with the Northern Regional Police Command was shot dead at a police checkpoint on the Tamale-Kumbungu road in the Sagnarigu District.

Armed men in a grey saloon car shot her when she stopped their vehicle at the checkpoint.

The killers took away two rifles belonging to the deceased while her other colleague escaped.

On 19 August 2019, Corporal Bernard Antwi, 37, attached to the Manso Nkwanta Divisional Command in the Ashanti Region, was found dead after working hours at Manso Abodom in the Amansie West District.

On the same day, another policeman, Lance Corporal Alhassan Asare, was also found dead while on duty at Akim-Swedru in the Eastern Region.

The police are investigating the murders.