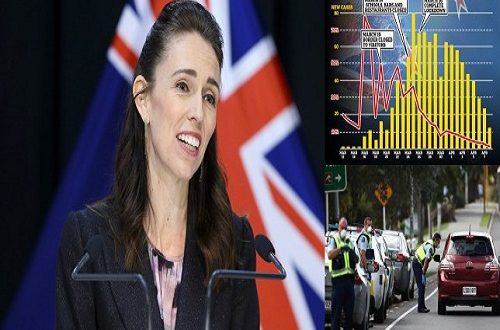 With new cases in single figures for several days – one on Sunday – Prime Minister Jacinda Ardern said the virus was “currently” eliminated.

But officials have warned against complacency, saying it does not mean a total end to new coronavirus cases.

The news comes hours before New Zealand moves out of its toughest level of social restrictions.

From Tuesday, some non-essential business, healthcare and education activity will be able to resume.

Most people will still be required to remain at home at all times and avoid all social interactions.

“We are opening up the economy, but we’re not opening up people’s social lives,” Ms Ardern said at the daily government briefing.

New Zealand has reported fewer than 1,500 confirmed or probable cases of coronavirus and 19 deaths.’ Avoided the worst’

New Zealand’s Director-General of Health Ashley Bloomfield said the low number of new cases in recent days “does give us confidence that we have achieved our goal of elimination”.

He warned that “elimination” did not mean there would be no new cases, “but it does mean we know where our cases are coming from”.

Ms. Ardern said there was “no widespread undetected community transmission in New Zealand”, adding: “We have won that battle.”

But she said the country “must remain vigilant if we are to keep it that way”.

New Zealand brought in very tough restrictions on travel and activity early on in the pandemic when it only had a few dozen cases.

It closed its borders, started enforcing quarantine of all arrivals in the country, brought in a stringent lockdown, and mounted extensive testing and contact tracing operation.

Ms. Ardern said modeling indicated New Zealand could have had more than 1,000 cases a day if it had not brought in the lockdown so early.

She said the country could never know how bad it would have been, but that “through our cumulative actions we have avoided the worst”.

At midnight local time (12:00 GMT on Monday), New Zealand will move from Level Four lockdown to Level Three. That means most businesses will be able to reopen – including restaurants for takeaways – but not those in involving face-to-face contact.

New Zealanders are being told to stick to their “bubble” – a small group of close friends or family – and to stay 2m (6ft) away from people.

Previous Courts will demand that landlords, tenants showed ubuntu during lockdown, lawyer says
Next VIDEO+AUDIO: Two professional slay queens fight publicly over a ‘bleached’ boyfriend who ‘chopped’ both of them