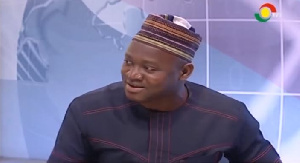 Member of Parliament for Tamale North Constituency Alhassan Suhuyini says he feels vindicated by the performance of the Special Prosecutor after 15 months in office.

The National Democratic Congress (NDC) lawmaker says he is, however, not happy with the turn of events for the Office of Special Prosecutor, which was set up to fight corruption.

For him, “the motive was clearly not national in character”.

Alhassan Suhuyini expressed these sentiments on TV3/3FM’s The Key Points on Saturday, May 25.

After being sworn on February 23, 2018, Mr Amidu until last Thursday had failed to prosecute a single case.

His first case filed at an Accra High Court is against MP for Bawku Central Constituency Mahama Ayariga.

According to Alhassan Suhuyini, the inaugural case is “an anti-climax” given the public’s expectation of the Special Prosecutor.

He said the mindset of both the Special Prosecutor and the government was not right.

No wonder, he further said, Mr Amidu was starved of resources at the incipient stages of the set-up of the Office.

“Resources were provided and they said go to work like some bulldog,” the Tamale North MP cited.

For him, the case against Mr Ayariga would not wash since the former minister of state complied with tax obligations as requested of him by his agent.

“Later [Mahama Ayariga] was told to pay more, which he has paid,” he added.

Alhassan Suhuyini said Mr Amidu should rather turn his attention to corruption within his outfit especially when he had blamed persons in authority for the actions of their appointees.

He was alluding to recent allegations of corruption against some officers at the Office of Special Prosecutor.

“Staff in his office are corrupt, but does that make Martin Amidu corrupt?” he wondered.