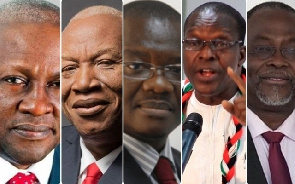 NDC polls: No masked security officer will be allowed

The Eastern Regional Secretariat of the Opposition National Democratic Congress(NDC) has stated that it will not allow any masked security operative in Saturday’s flagbearership election.

The Regional Secretary Mark Oliver Kevor, speaking to the media said the party has handed over the entire security operations to the Police and has asked the Police to deal with miscreants who will misbehave under the guise of providing parallel security in any form.

“We have notified the regional Commander of Police because as a party we have decided that we will not rely on any internal party security. We are expecting that the police take charge of the security for the day. We don’t want anybody to be wearing shirts, masks or whatever portraying himself as party security or do any security job on the day. We have given the Police our full commitment and we have asked them to deal with miscreants who will be misbehaving in the name of Party internal security operatives”.

He said about 29,000 delegates are expected to cast their votes in the region. Polls begin at 7am and ends 5pm.

The delegates, he said, consist of branch executives, Constituency executives, Regional Executives, Founding Members, Regional Council of Elders, Members of Parliament and Former Government Appointees who are card bearing members of the party.

The election will take place in all 33 Constituencies in the region. Materials and all needed logistics have been dispatched to the constituencies.

He said the party is expecting free, fair, transparent and peaceful election.

The NDC is heading to the polls Saturday, February 23 to elect a flagbearer ahead of the 2020 elections.

Mahama is battling six others including Second Deputy Speaker of Parliament, Alban Bagbin and Joshua Alabi for the opportunity to lead the NDC into the 2020 general elections where he will likely face his old nemesis incumbent President Nana Akufo-Addo.