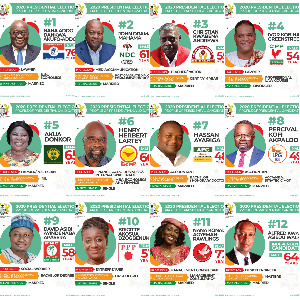 Election 2020: Profiles of all 12 presidential candidates

The Electoral Commission of Ghana ahead of the 2020 presidential election has released the profiles of all the candidates.

The December 2020 presidential election is set to go in history as having the longest ballot paper in terms of the number of candidates contesting.

The 12 candidates set to contest in the elections consist of three females and 9 males. Of all the candidates, only one person is contesting as an independent candidate with the rest vying on the tickets of various political parties.

Details of the candidates put out by the EC covers their names, sex, age, profession, highest educational qualification as well as their marital status.

See below profiles of the candidates in order of appearance on the ballot paper:

The New Patriotic Party candidate, President Nana Addo Dankwa Akufo-Addo will be contesting his fourth presidential election on December 7, after securing his first win on his third attempt in 2016.

The president is 76 years of age and is a lawyer by profession. His highest level of education is a Bachelor of Science in Economics and is married to Rebecca Akufo-Addo. 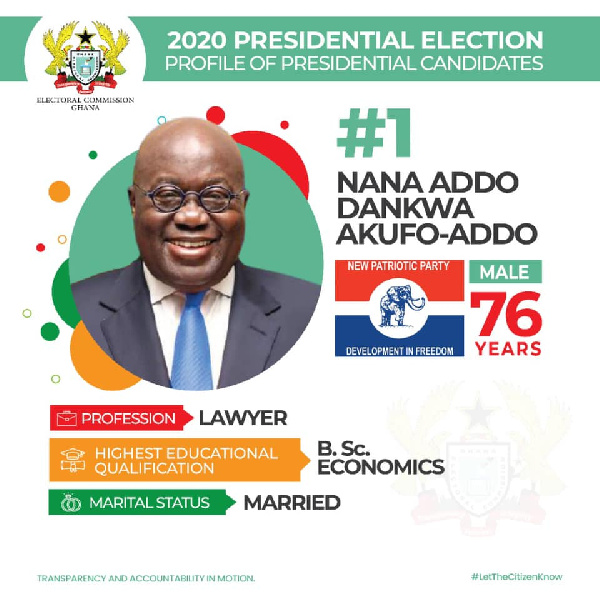 John Dramani Mahama of the National Democratic Congress was unseated by the incumbent president in 2016. Coincidentally, he comes second place on the ballot paper, right after his main contender for 2020.

Former President Mahama, aged 61 according to the EC is a media and communication person by profession and holds a Post Graduate Diploma in Communication Studies as his highest educational qualification. The former president is married. 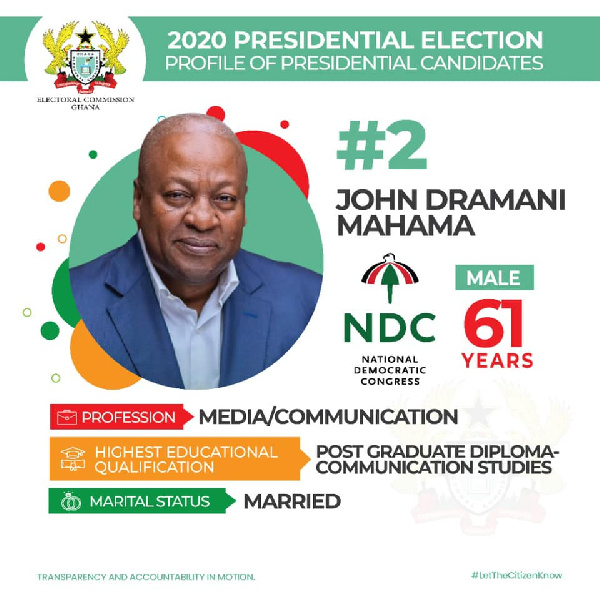 Christian Kwabena Andrews founded the Ghana Union Movement ahead of the 2020 presidential election and has been given the third position on the ballot paper by the EC. He is 55 years of age, a teacher and a pastor by profession. He holds a four-year Cert “A” and is married. 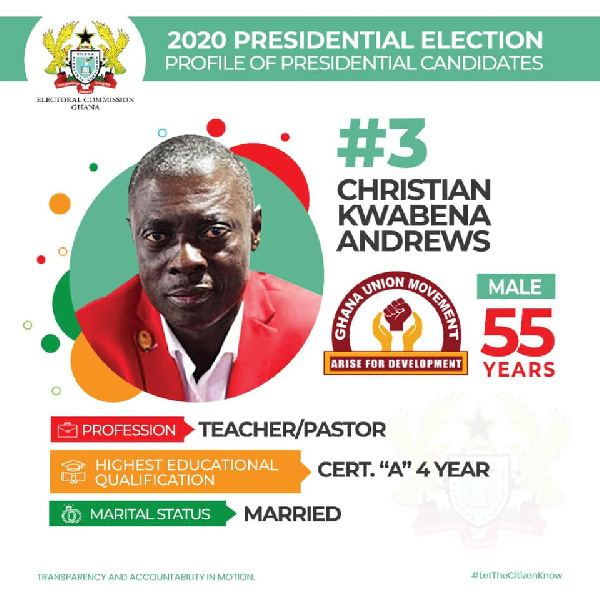 Ivor Kobina Greenstreet will be contesting the presidency for the second time having contested in 2016 on the ticket of the Convention Peoples Party. Representing the CPP once again he will be fourth on the ballot paper.

Greenstreet is 54 years old, a lawyer with a professional law course certificate and is divorced.

Having been disqualified from contesting in the 2016 elections, Akua Donkor is finally set to have her name on the ballot paper, appearing in the fifth position come December 7. She is 65 years of age, identifies as a farmer and a politician by profession, and holds no formal education qualification. Akua Donkor is married. 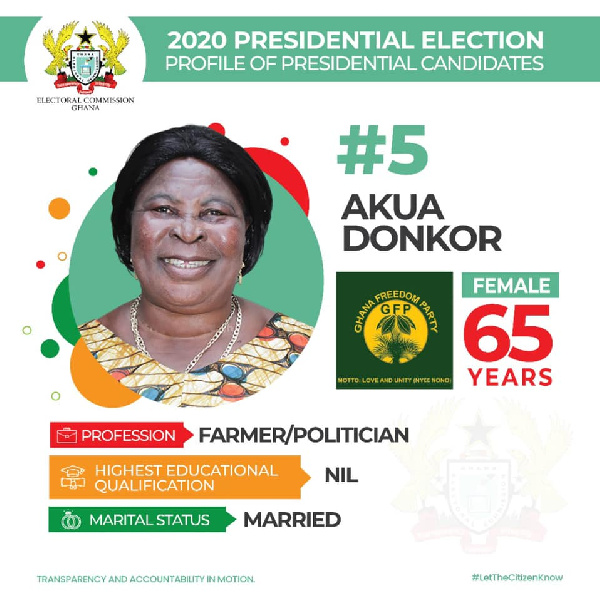 Henry Herbert Lartey is a second timer of the Ghanaian presidential election on the ticket of the Great Consolidated Popular Party. As a profession, he is engaged in finance, agro-business and international trade. Mr Lartey is one of two persons with the highest qualification amongst the contenders, an MBA in Economics and Finance and is single. His age is 66. 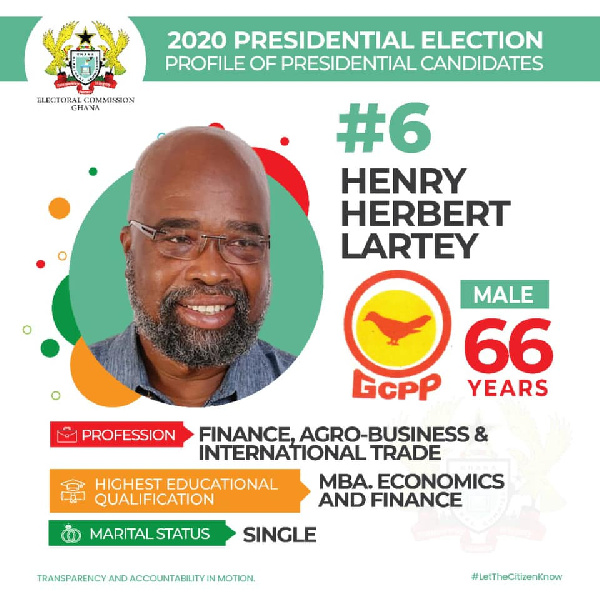 Having lost the People’s National Congress nod to contest the presidency in 2016 after contesting in the 2012 elections, Hassan Ayairga left the party to form the All People’s Congress.

Appearing at number seven on the ballot paper, Mr Ayariga aged 48 will be is the youngest candidate in this year’s election. He is an accountant by profession with a Bachelor Honorary Doctorate Degree and is married. 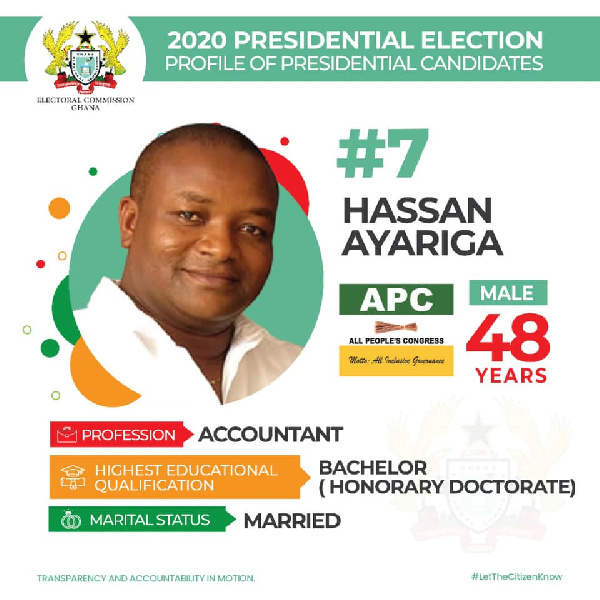 Percival Kofi Akpaloo founded his Independent People’s Party (IPP) in 2011 but is now set to have his first shot come December 7. He was disqualified by the EC in the 2016 contest. He is an accountant with an MBA in Strategic Management and is married. 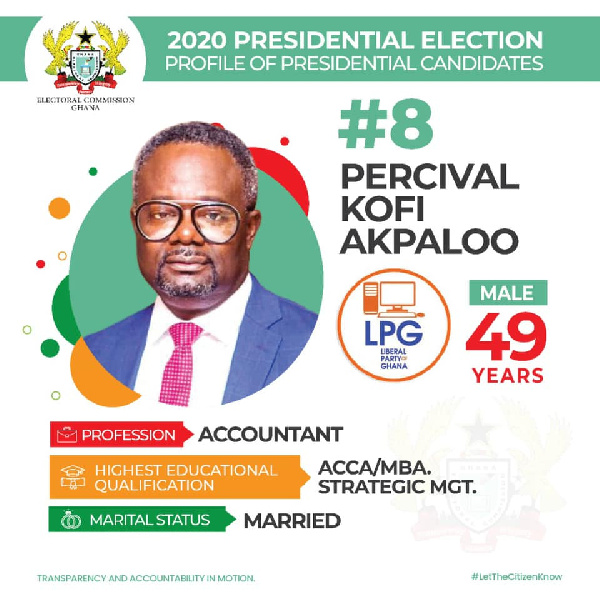 David Apasera will be contesting the 2020 presidential polls on the ticket of the People’s National Congress having been elected flagbearer a little over a month ago.

He is 58 years old, a social worker with a Bachelors Degree and is married. 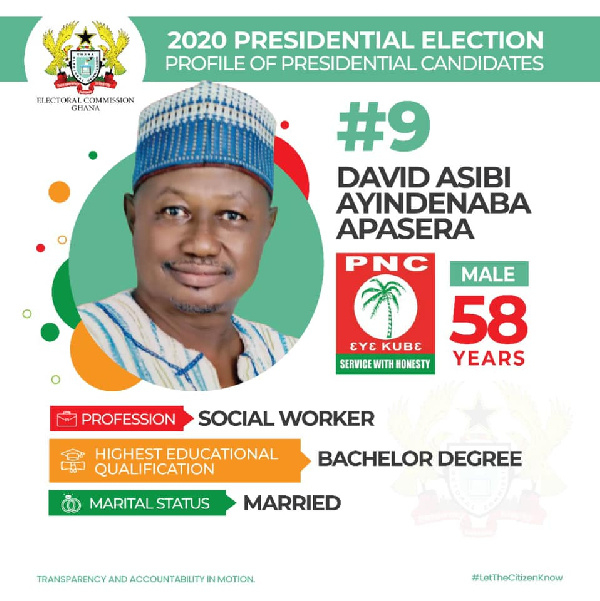 Being one of three female candidates, Brigitte Dzogbenuku is the flagbearer of the Progressive Peoples Party founded by veteran presidential candidate, Dr Papa Kwasi Nduom. Aged 51 years, she is an entrepreneur by profession holding a First Degree and is single. 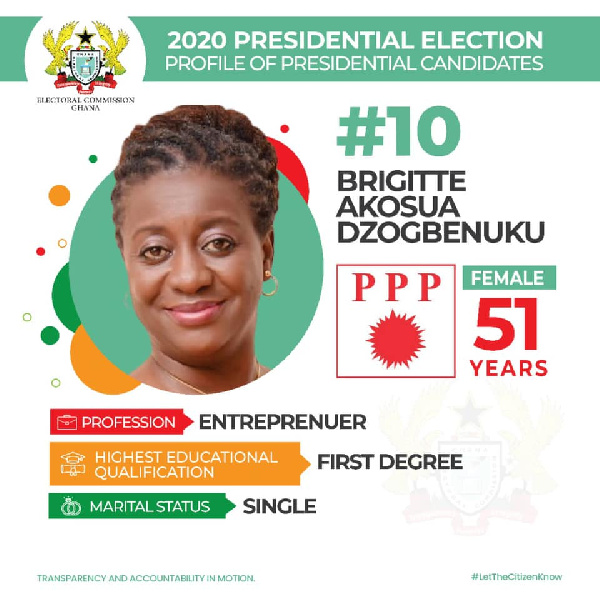 Nana Konadu Agyeman-Rawlings left the National Democratic Congress founded by her husband, former President John Rawlings after being denied the party’s flagbearership in 2016.

She formed her own party, the National Democratic Party and gained 0.16% of votes in the 2016 elections. Aged 72 years, Mrs Rawlings will be number 11 on the ballot come December 7. 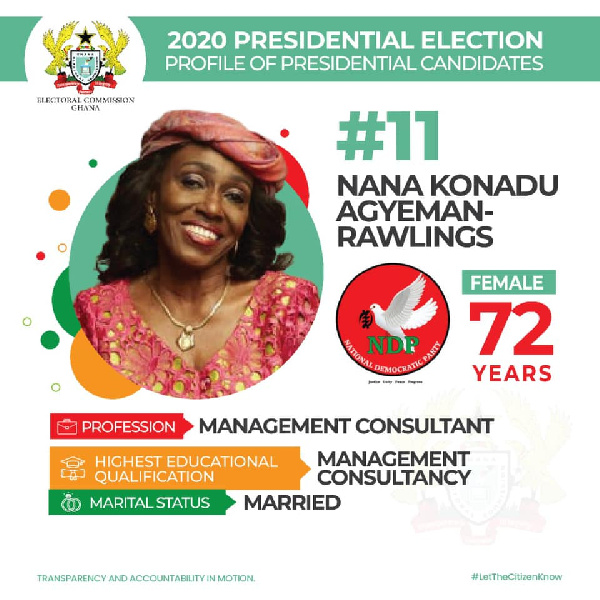 Being the only Independent candidate in the contest, Alfred Kwame Asiedu Walker by default has been given the last spot on the ballot paper for the 2020 presidential contest.

At 64 years, Mr Kwame Walker is a Design Engineer by profession with a Masters Degree and is married. 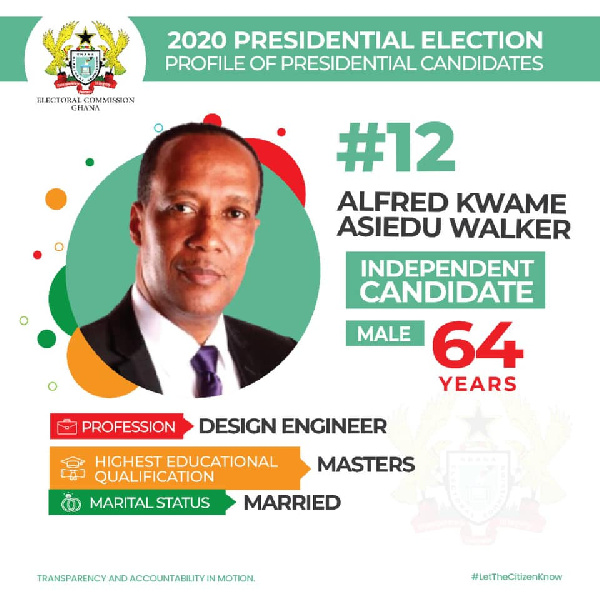