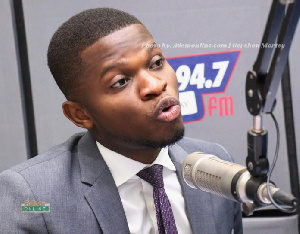 NDC activist Dela Coffie has berated the National Democratic Congress for not heeding to his caution when he spoke against the election of Sammy Gyamfi as National Communication Officer of the party.

According to him, Sammy Gyamfi is a neophyte who needed more grooming because his umbilical cords are still uncut and had no right to launch an attack on the party’s leadership in parliament.

He said he has been impressed with Sammy Gyamfi’s communication style but thought it too early to elevate him.

“When Sammy Gyamfi became politically conscious and started doing NDC politics in 2017 thereabout, I tweeted my praise for his style. Incredibly impressed by his verbal communication skills, I wrote about how the new kid on the block was going to add to the NDC’s stock of fine communicators. That was certainly how it seemed at the time. Then the Mahama bloc put him up for leadership position.” CDela Coffie wrote.

“I tweeted that it seemed dangerously premature for him to be elevated to the position of National Communication Officer. My opposition to that move was to the effect that there’s more to being a manager of the Communications Directorate than just being a talking head, and that Sammy Gyamfi needed a bit more time to warm himself up into the role.” He added.

His comment comes in the wake of the alleged attack launched by Sammy Gyamfi on the Speaker of Parliament, Alban Bagbin and the leadership of the Minority MPs including the Minority Leader, Haruna Iddrisu and the Chief Whip, Muntaka Mubarak after the House voted to confirm some ministerial

In a post on Lawyer Sammy Gyamfi’s official Facebook wall, the outspoken communicator accused his leadership of betraying party supporters by failing to reject some nominees of Akufo-Addo.

“Comrades, the betrayal we have suffered in the hands of the Speaker of Parliament, Rt. Hon. Alban Bagbin, the leadership of our Parliamentary group, particularly Hon. Haruna Iddrissu and Hon. Muntaka Mubarak, and dozens of our own MPs, is what strengthens me to work hard for the great NDC to regain power.”

“It’s about time we understood, that we don’t have any NDC Speaker of Parliament. No we don’t! We have a Speaker who rode on the back of the NDC into Office to pursue his own parochial agenda and nothing more. You trust them, at your own peril,” part of the post read.

Mr. Dela Coffie believes the development was long expected as he had warned the party. He called on the party to crack the whip on Sammy Gyamfi to ensure order.

“After a spotless 30-year political career, Alban Bagbin is being accused of all this misconduct now, by a neophyte whose political umbilical cord is yet to come off.  Is there a case that Sammy Gyamfi can spew such invectives and the party won’t crack the whip?

Previous Anger over ‘profane’ billboard near National Mosque at Kanda
Next Your 2017 interview with Aljazeera gave us hope, now we are more endangered – LGBTQ+ Ghana to Akufo-Addo