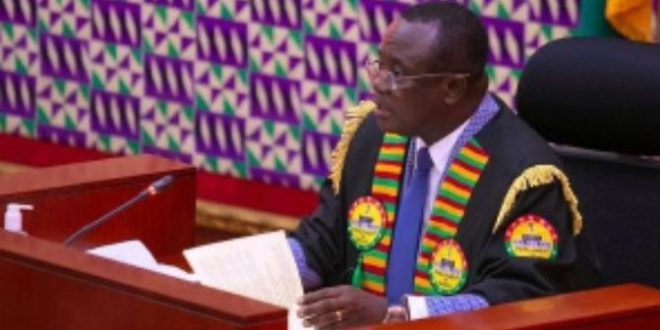 Rockson-Nelson Dafeamekpor, Member of Parliament for the South Dayi Constituency, has shared a video of First Deputy Speaker of Parliament, Joseph Osei-Owusu, affirming that he loses his vote whenever he presides over the House.

Dafeamekpor shared the 37-seconds clip which captures Osei-Owusu, alias Joe Wise, as stating thus: “Honourable Members, when it comes to the question of voting, it is clear that anytime any of the Deputy Speakers, or any other member elected to preside is in the chair, that member does not vote. That has never been in dispute.

“Anytime a member is presiding, either the Deputy Speaker or a member who by necessity is elected from our main members to preside, that member does not vote,” he stresses.

In the wake of the March 9, 2022 Supreme Court ruling that affirmed that Deputy Speakers could vote and also constitute quorum for the House, Dafeamekpor has been vocal about the flawed nature of the unanimous ruling by the Justice Jones Doste-led bench.

He captioned his post a follows: “This was the 1st Deputy Speaker speaking to clarify this same matter sometime last year then they got him to change his mind a couple of months ago because they needed more numbers for E-Levy.

“Vindication lies in the womb of time. Just watch this short video and hear him ….,” he wrote.

The video per GhanaWeb checks was in the aftermath of the decision by the Majority Group to reverse a purported rejection of the 2022 budget by the Minority.

In a later interview with TV3 Network, Joe Wise reiterated his position of having to be counted but losing voting rights.

“When I preside, I lose my vote. I can’t vote but it doesn’t mean I am not a Member present. There is no way our proceedings will be correct if I am not marked present,” he stated.

This was the 1st Deputy Speaker speaking to clarify this same matter sometime last year then they got him to change his mind a couple of months ago because they needed more numbers for Elevy.

Vindication lies in the womb of time. Just watch this short video and hear him ….???? pic.twitter.com/sipu8PnTLD

Change of stance, chaos over E-Levy

Weeks after his position that he could be counted but cannot vote, Joe Wise made a U-turn when he attempted to vote on government’s Electronic Transactions Bill (E-Levy).

He stated his new position relative to voting insisting that he was entitled to be counted and to vote even when he is presiding, except that he must leave the Speaker seat are take off his gown before doing so.

His decision triggered chaotic scenes in Parliament leading to the suspension of consideration on the Bill.

In an interview with Joy News after the incident in the House he said: “It is clear that you do not retain your original vote whilst on the seat. What I did on that day was that after the 2nd Deputy Speaker had voted, I invited him to take the chair, so I can leave the chair, de-robe and vote.

He continued: “So my insistence is not to vote from the chair, but as and when necessary I will leave the chair if I’m the one presiding or when the 2nd Deputy Speaker is presiding, he can leave the chair and change over so he can also exercise his vote. That, I insist on it.”