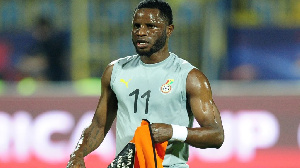 Black Stars midfield dynamo, Mubarak Wakaso has revealed why he couldn’t control his tears following Ghana’s exit from the 2019 Africa Cup of Nations in Egypt.

Ghana, who failed to make it to the final four as usual suffered early elimination in the 32nd edition of Africa’s prestigious tournament losing 5:4 on penalties to the Carthage Eagles of Tunisia at round 16.

“Sometimes people understand what we the players want,” he told Angel TV in an interview.

“We were confident of winning the trophy ahead of the tournament but our exit was a shock to me.

“The players gave everything on the pitch but we failed to progress against Tunisia.

Despite Ghana exiting from the tournament, the 29-year-old was named Man of the Match.

Previous You can’t handle my sexiness – Sista Afia goes hard against ‘role model’ advice
Next COVID-19: The Light Foundation Commends Bodies for supporting Government; Society urged to be compassionate towards the needy