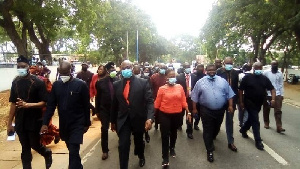 Minority MPs to face court on Monday over protest march

Minority Leader and ten other NDC MPs will face the Accra Circuit court on Monday, January, 04, 2020 over the Minority’s protest march to the headquarters of the Electoral Commission.

They have been charged with unlawful assembly for failing to notify the Police of holding of a special event contrary to Section 1(1) and (2) and 9(a) of the Public Order Act, 1994(Act 491).

This follows the NDC MPs breached a security barricade to present a petition at the Electoral Commission headquarters on December 23, 2021.

The MPs were also sued for failing to notify the police about their march.