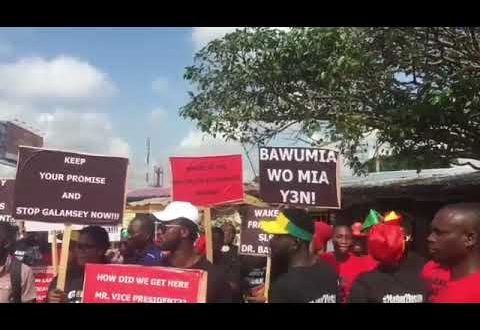 The action was in protest against the current economic woes in Ghana.

They were clad in red and black t-shirts branded Ghana Must Work.

The group wielded placards whose inscriptions read Dr Bawumia, where is the dollar you arrested? The country is sinking do something now, Mr President we are suffering, our children are hungry and we are hungry do something Dr Bawumia among others.

The exercise started from Kawukudi through to the 37 Liberation road and finally at the Veep’s office where a Deputy Chief of Staff received a petition from the group on Dr Bawumia’s behalf.

Ghanaians in the past weeks have been expressing their frustration against the government amid the rise of the dollar against the cedi, fuel price hikes, goods and services as well as worsened standard of living.

In this regard, former President John Mahama on Thursday addressed the challenges that have crippled Ghana’s economy at the University of Professional Studies, Accra.

Mr Mahama, who spoke on the theme Building The Ghana We Want, among other things encouraged Ghanaians to consume local foods.

To the government, he proposed a cut in the budget of the presidency as well as among other things such as scrapping some ministries and agencies whose functions he believes are similar.

Meanwhile, President Akufo-Addo, following a Cabinet retreat and other stakeholder engagements, is expected to address the nation on Sunday.