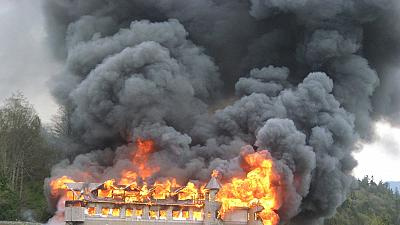 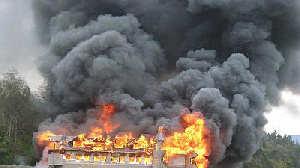 A military base and an office of the Forestry Commission have been set ablaze by irate youth in the Bono Region.

The incident of Tuesday, August 23, 2022; took place at Diabaa in the Dormaa West District of the region.

According to multiple media reports, the youth resorted to the burning after Forestry officials “cut down about twenty plantain crops that had been grown in a forest reserve by farmers in the community,” Citi News reportage noted.

It added that traditional authorities were helping authorities to arrest all perpetrators of the crime, citing the Regional Minister and Chairman of the Bono Regional Security Council, Justina Owusu-Banahene.

“People have farmed within the reserve and so we questioned the authority with which they are using the forest.

“The people placed lorry tyres on the road so that when the forest officers get there, they will block them from entering. By the time the Police got there, they had set the forestry office ablaze and razed the office,” a source is quoted to have said.