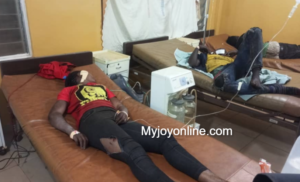 2 dead, over 20 injured after bus crashed into Nasia bridge in North East Region

Two persons have died after a vehicle travelling from Kumasi to Bawku crashed into the Nasia bridge in the North East Region.

JoyNews correspondent Eliasu Tanko explained that the incident occurred when the driver encountered a herd of cattle while on the stretch in the West Mamprusi district in the early hours of Tuesday.

In an attempt to prevent a collision, “his brakes failed and he ran into the Nasia bridge.”

Some 20 others are in critical condition and have been rushed to the Walewale Hospital.

“I can see one girl with a broken leg and others came here unconscious,” Eliasu Tanko said on Joy FM’s News at 6.

Mr Tanko reports that more victims are being brought into the health facility as the emergency ward is gradually becoming overwhelmed.

Meanwhile, the Tamale – Bolga highway has been blocked with travellers left stranded.