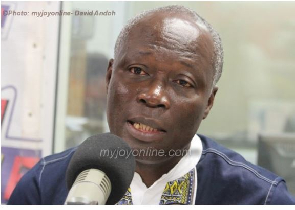 Legislator for Odododiodio says the turnout at the party’s presidential primaries signals the National Democratic Congress (NDC)’s readiness to wrestle power from the governing party.

Nii Lante Vanderpuye who was elated with the party pulling off an incident-free poll so far said the “super incompetent” NPP should get ready to step down.

“So far the process has been very impressive and the turn out has been good. I have been to many places in the capital starting from Amanfro to Odorkor, Bubuashie, Kaneshie, Art Centre, Korle Gorno, Korley Klottey and Odododiodio.

“Everywhere I have been, there were reports of so many people in queues in the morning between 7 – 10 am which created a little pressure at the polling centres but later things ease up,” he told Joy News’ Komla Adom.

Describing the attendance as extremely impressive and peaceful, he said almost 95 per cent of the delegates have voted at some polling centres.

“The only exception is at Prampram which has been resolved. We are hoping that at the end of the day everybody will be happy about the final result. It has been free and fair and I know even the losers will be very happy with the process,” he said.

The former Sports Minister said it is a great achievement for the party and it gives them an opportunity to stand firm, work together so they achieve their aim of reclaiming power.

Previous SHOCKER: Woman allows EX-boyfriend to father all 6 children in her 13yr old marriage; husband still in the dark
Next NDC Presidential Primaries: One injured in Sam George’s orchestrated fight