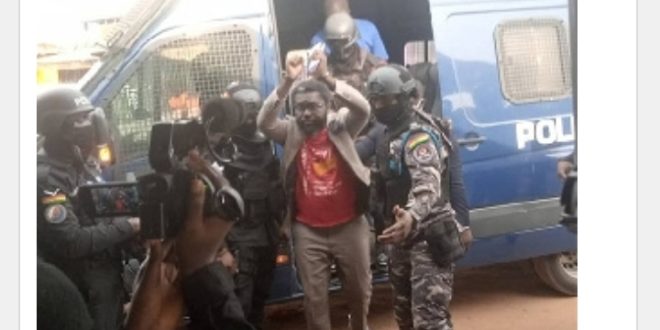 Barker-Vormawor is still in jail without bail

Former Special Prosecutor Marin Amidu has bemoaned the decision by the state to keep #FixTheCountry convenor, Oliver Mawuse Barker-Vormawor, behind bars while Kwame Baffoe (Abronye DC) has been granted bail.

According to him, the offences committed by both Barker-Vormawor and Abronye, New Patriotic Party (NPP) Chairman for the Bono Region, are treasonous and therefore should be treated equally.

“When Mr Kwame Baffoe was challenged several times by his interviewer as to the veracity of his assertions, he insisted that they were true and sought to justify the allegations on the interview which is now trending online. By failing or refusing to report former John.

“Mahama’s recruitment of Al Qaeda and Mr. Barker-Vormawor to over-throw the government of Ghana by force of arms Mr. Kwame Baffoe was committing the suspected offence of misprision treason under section 181 of the Criminal Offences Act, 1960 (Act 29),” a statement by Amidu read.

He added that article on misprision treason states that “a person who knows the commission of high treason, or treason within the meaning of clause (17) of Article 19 of the Constitution, and does not forthwith reveal it to the President, or to a police officer not below the rank of Inspector, commits a misprision of treason and is punishable as a first-degree felony.”

The former Special Prosecutor indicated that Abronye gaining his freedom back while Barker-Vormawor is refused bail is proof of the partiality in Ghana’s justice delivery system.

“The arrest and detention of Oliver Barker-Vormawor, the Convenor of #FixTheCountry and Mr Kwame Baffoe, the powerful Bono Regional Chairman of the governing political party, demonstrates the partiality with which the fundamental human rights and freedoms guaranteed to citizens might through the exercise of the investigatory and prosecutorial discretion in the system of criminal justice administration at the level of the executive branch of government,” he added.

Read full statement of Amidu below