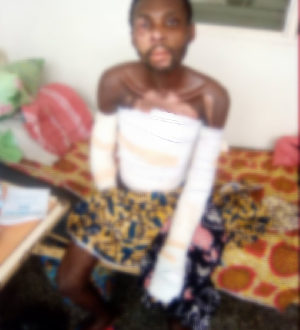 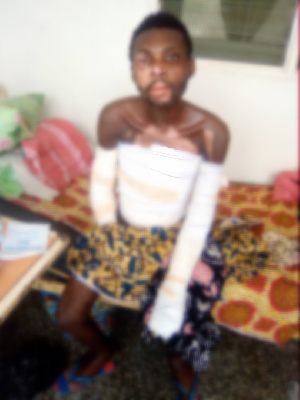 A 20-year-old man, Amos Ayi, living with epilepsy has sustained serious burns after falling into a naked fire during a seizure attack.

The incident occurred at Oboho, a farming community in the Ayensuano District of the Eastern Region.

The father of the victim, Anoma Nyarko, a chief farmer narrated to Starr News that on a fateful day he was in the room when he smelled something like an animal being roasted.

His curiosity forced him out of the room and to his dismay, found his son lying unconscious in a naked fire and being charred.

Amos Ayi sustained life-threatening burns on the upper part of his body-face, arm, chest and abdomen when rescued to the hospital.

“I was in my room because it was raining on a fateful day. But I was smelling something like a roasted animal so I stepped to find out if any of the domestic animals have mistakenly fallen into the fire only to see my son lying in the fire and being burnt.

“In fact, he had been roasted and turned blackish and swollen so I shouted for help and we removed him and rushed him to Anum Apapam health center but they quickly referred us to Suhum but Suhum too couldn’t handle so we were referred to Eastern Regional Hospital”

He continued “My son is Epileptic but for close to two years now I have not seen him suffer any seizure attack so I was surprised. It is by God’s grace that my son is still alive. His belly was deeply rooted.

“I commend doctors at the Eastern Regional Hospital for their good work done. In fact, I don’t know what to tell them. They have done very well I didn’t know we have such a good doctor in Ghana” the father of the victim told Starr News Eastern Regional Correspondent Kojo Ansah.

Mr. Nyarko appealed to the general public to support him foot the rest of the medical bills of his son.

“What I am appealing for is public support. Already I have spent close GH¢10,000. They say they will do surgery on his tummy because all his intestines nearly gushed out. I need support to pay the rest of the bills.”

Epilepsy is a chronic non-communicable disease of the brain that affects people of all ages.

According to the World Health Organization (WHO) , around 50 million people worldwide have epilepsy, making it one of the most common neurological diseases globally.

Nearly 80% of people with epilepsy live in low- and middle-income countries.

It is estimated that up to 70% of people living with epilepsy could live seizure- free if properly diagnosed and treated.

The risk of premature death in people with epilepsy is up to three times higher than for the general population.

Three quarters of people with epilepsy living in low-income countries do not get the treatment they need.

Epilepsy is characterized by recurrent seizures, which are brief episodes of involuntary movement that may involve a part of the body (partial) or the entire body (generalized) and are sometimes accompanied by loss of consciousness and control of bowel or bladder function.

Seizure episodes are a result of excessive electrical discharges in a group of brain cells. Different parts of the brain can be the site of such discharges.

Seizures can vary from the briefest lapses of attention or muscle jerks to severe and prolonged convulsions. Seizures can also vary in frequency, from less than 1 per year to several per day.