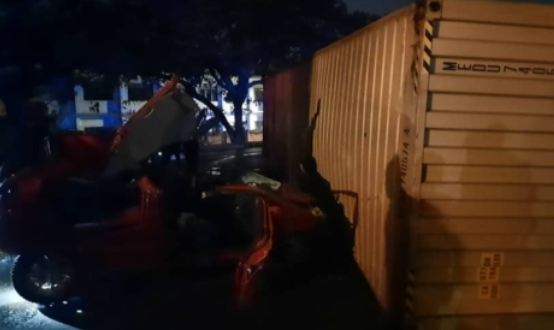 Two crashed to death by cocoa truck in Takoradi

A cocoa truck is reported to have killed the driver and passenger of a Daewoo Matrix vehicle on the Vodafone highway in Takoradi.

The fatal accident occurred on Friday, November 27 at 9:30 pm according to the Regional Police command.

The two bodies have since been identified as Eric Pamford Peters aged 30 and Ama Amponsah aged 27.

According to JoyNews’ correspondent Ina Thalia Quansah, the driver of the truck, Adu Emmanual with car registration number GT 5953-20 veered off the Vodafone intersection.

After losing balance, the 40-foot container of the truck got detached and fell on the Daewoo Matrix registered WR 1049-19 coming from the Paa Grant roundabout.

She also disclosed that the deceased were trapped in the private car but with the help of the Fire Service and Road safety recovery truck, the bodies have been retrieved.

The bodies have been deposited at Effia Nkwanta Government hospital morgue ready to undergo an autopsy, she noted.

Also, the accident vehicles have been towed to RMTTD yard at Sekondi pending testing.