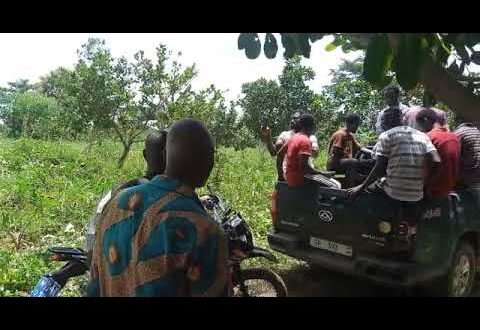 A middle-aged man, identified as Kwame Amankona, has killed himself after reportedly shooting his ex-wife to death at Kutre No. 2 at Berekum of the Bono Region.

A family head, Kwaku Kyeremeh, said Mr Amankona attempted to reunite with Mary Kyeraa with whom he has two children.

Madam Kyeraa, however, turned down his offer, leading to her untimely death.

Esther narrated following their divorce, Mary moved to Kutre No 2 where she lived with her children and was returning from the Berekum Holy Family where her [Mary’s] daughter was on admission when she was killed on Friday dawn.

Kwame, who fled after the heinous crime, was later found hanging dead in a bush.

Meanwhile, some residents who have been thrown into a state of shock and surprise, say they never imagined Kwame could commit such a crime considering his calm personality.

In a typical traditional setting, tradition frowns on Kwame’s act and if swept under the carpet, it is believed that a calamity could occur in the community.

The chief of Kotaa where Kwame resided, Osaberima Kwaku Baah Brenty II, has, therefore, revealed traditional authorities as soon as possible will pacify the gods to avert any calamity.

He said they will sacrifice sheep, fowls and pour libation to the gods of the land otherwise greater incidents could happen.

Police in the area have sent the bodies of the deceased to the Berekum Holy Family morgue as investigation continues.