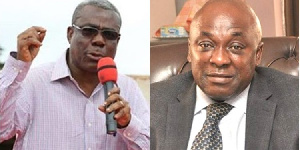 Peter Mac Manu, the campaign manager for the New Patriotic Party (NPP) for the 2020 general elections and Carlos Ahenkorah, a Deputy Minister for Trade and Industry have been admitted at the Intensive Care Unit of the Korle Bu Teaching Hospital after allegedly testing positive for COVID-19.

According to reports gathered by GhanaWeb, many government officials have tested positive for the diseases and are currently receiving hospital treatment.

The current reports are only coming in after it emerged that Kwadwo Owusu Afriyie aka Sir John, the CEO of the Forestry Commission who once served as General Secretary of the NPP died Wednesday at the Korle Bu ICU after testing positive for COVID-19.

The death of Sir John follows the recent similar death of Albert K.K. Sam, the Mayor of the Sekondi-Takoradi Metropolitan Area (STMA). K.K. Sam died on Friday, June 12, 2020, whilst receiving treatment at the University of Ghana Medical Centre (UGMC) for the same COVID-19.

Kwaku Agyeman-Manu, the Minister for Health recently tested positive for COVID-19 and was admitted at the UGMC.

Dr Lydia Dsane-Selby, the CEO of the National Health Insurance Authority (NHIA) also tested positive for COVID-19 and has been responding to treatment.

It is not clear whether the two have tested positive for COVID-19 after reports indicated that the two ministers have been admitted to a place called the ‘Red zone’, a place where persons who test positive for the terrible viral disease are kept.

The two officials later confirmed in separate press releases that they had symptoms of COVID-19 so they self-isolated at the health facility.

There are also reports that some two deputy ministers who have tested positive for the virus are at the UGMC receiving treatment.

After the just ended parliamentary primaries, followed a week later with the presidential primary, of the NPP, it emerged that many of the MPs, nominees, and losers, among whom are government officials, who were seeking to become MPs in the next parliament disregarded President Akufo-Addo’s COVID-19 protocols which were laid down to combat the spread of the virus in Ghana.

The President during his acclamation as flagbearer of the NPP at Alisa Hotel, Accra, on Saturday, warned his party faithful to not let this happen again.

He was scolded by critics for not taking strict measures to punish the foolhardiness, which has landed some persons including ministers of the Gospel in jail.

The novel Coronavirus protocols the Akufo-Addo appointees breached are offences under an Executive Instrument, EI 64, passed by Parliament in March, and assented to by the president himself.

Previous Sir John spent 3 days in my house when I lost my mother – Asiedu Nketia
Next [VIDEO]: EC’s plan to register Ghanaians stuck abroad out soon