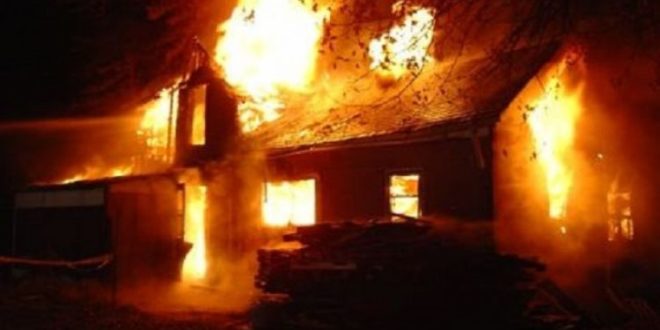 Fire destroyed parts of one of Tema’s biggest market, the community one (1) market Tuesday evening.

The fire is reported to have lasted for couple of hours, but so far no casualties have been reported.

The incident drew many people around Community One to the scene, with motorists driving at slower pace on the Community center road.

Some inquisitive motorists also parked their vehicles to catch a glimpse of the raging fire, with many having their smartphones hoisted to record videos.

The Tema Metropolitan Chief Executive, Mr Felix Mensah Nii Anang-La in an interview with SVTV Africa’s DJ Nyaami revealed that, he was alerted by task force at the market of the fire outbreak and quickly had to rush to the scene.

Mr. Anang-La said preliminary investigations pointed to a fire been set up at the market by some traders for cooking, but added quickly that “I don’t want to conclude because we are yet to confirm that, as investigations by the Fire Service are still ongoing.”

However, he said, the area was full of traders who prepare food at the market and sell which he said, it is not allowed.

Mr. Anang-La noted that, his office will see to it that, those using the market as home will be evacuated to prevent future occurrences.

One of the affected traders, who spoke to SVTV Africa said she has lost items worth thousands of Ghana cedis and an amount of GHS2,500.00 after the fire outbreak.