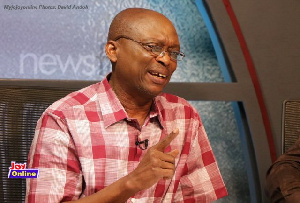 Then you come to the Minority Leader himself who said: “The people may decide otherwise and you cannot determine it; so the support of those of us on this side of the house is conditional to the fact that DCEs should be elected but they should be elected on partisan lines. That is the principle we will support and walk with…Mr. Speaker, the pretense must end; all of us here know that clandestinely political parties support district assembly elections in Ghana. It is provided in the constitutional review report and I can read portions of it…So Mr. Speaker, two principles: amend the constitution, allow for popular elections of DCEs, but do it on the principle of partisanship. We will support that…” Kweku Baako read, adding “I have the video and the audio and he (Minority leader) had loud applause; huge applause.

The Editor-in-Chief of the New Crusading Guide was in his elements on Wednesday, as he sought to expose the opposition party’s hypocrisy on the latter’s decision to opt for a “No” vote in the referendum on the election of MMDCEs on partisan lines.

Earlier this week, the opposition National Democratic Congress (NDC) dared the ruling New Patriotic Party to provide evidence proving that they agreed to campaign for a YES vote in the now aborted referendum.

This was after the NPP had condemned them for asking Ghanaians to vote NO during the referendum.

General Secretary of the NDC, Johnson Asiedu Nketiah, told OkayFM on Monday that “there was never a consensus on the referendum”, and that there was also “no meeting between them (NDC) and the president HE Nana Addo Dankwah Akufo Addo at the Jubilee House”.

He thereafter openly branded the President, H.E Nana Addo Dankwah Akufo “a liar” for the latter’s comments during a recent national broadcast about the supposed meeting to discuss the referendum.

But Kweku Baako, who was contributing to a panel discussion on Wednesday’s edition of Peace FM’s morning show ‘Kokrokoo’, revealed that apart from what the Minority leader, Haruna Iddrisu said in Parliament, there is also empirical evidence in the form of minutes of an IPAC meeting dated 23rd October where the opposition party agreed on a YES vote.