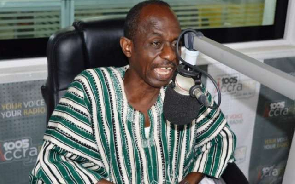 According to him, the police service has looked on as members of Delta Force have usurped their power and are undertaking operations in their name.

“The activities of these vigilantes have become very worrying, they go and undertake an operation, they come back and tell the police that this is what they’ve gone to do so the police must come out and claim responsibility. Do you know that the supposed security operative who arrested Koku Anyidoho at the time we were holding a press conference are members of the pro-ruling party’s vigilante group, Delta Forces? So we were even at the Police Headquarters before they regularized their action to seem as though it was the police that had effected the arrest,” Asiedu Nketia told host Kwaku Owusu Adjei on Anopa Kasapa on Kasapa FM while discussing the issue of political thuggery or vigilantism as it has been termed in Ghana’s political discourse.

He added: “Those who went to Hon. Collins Dauda’s house at 2:00 am to arrest a Member of Parliament was members of the Delta Force. They stormed his house wearing the same mask they wore during the recent Ayawaso West Wuogon by-election. When Collins Dauda who was not home at the time was informed that some supposed policemen had stormed his house and he called the Brong Ahafo Regional Police Commander, he denied knowledge or it, it was the next day that he made a U-turn and said he knew about them. Meanwhile, if these people had gotten hold of Collins Dauda that dawn, only God knows what could have happened to him.”

Asiedu Nketia was confident that Ghana Police officers who are known for their professionalism will give off their best if government through the President stops interfering in their affairs.