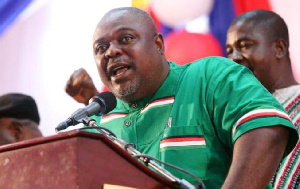 Koku Anyidoho ‘fires’ Ofosu Ampofo, says he should step down

A former Deputy General Secretary of the National Democratic Congress (NDC) Koku Anyidoho has asked the current National Chairman of the party Samuel Ofosu-Ampofo to step down if he cannot uphold the party’s constitution.

His comments come after Mr Ofosu Ampofo dismissed his earlier suggestions that he Mr Ofosu Ampofo should take over the leadership of the party from former President John Dramani Mahama.

Mr Ofosu Ampofo said the Presidential Candidate of the NDC in the 2020 elections is still relevant to the matter.

In a radio interview, Mr Ofosu-Ampofo said “Yes, the National Chairman becomes the leader of the party when we don’t have a flag bearer and we are not going into an election but John Mahama is very key, his influence, he managed to garner 6million votes plus for the NDC.

“Our Founder, President Rawlings is no more and John Mahama is the only former President from the NDC who is alive. He is our immediate past flagbearer of the party, he is a former President, per our constitution he is a member of the Council of Elders and so Koku Anyidoho should not tell us what we should do.

“Former President Mahama is relevant to the party today and tomorrow and we will count on his goodwill, his support and everything he has which is pushing the NDC forward.”

He further said the leadership of the party will heed calls from supporters to take further actions against Koku Anyidoho and former Central Regional Chair of the party Allotey Jacobs who have all been suspended from the party.

“What I can tell our supporters is that let us ignore Koku Anyidoho and Allotey Jacobs and focus on pour party,” Mr Ofosu Ampofo stated.

He added “As we speak, they have all been suspended from the party. If you wish that we take further actions against them following their action we are will listen. We will go and look at exactly what has to be done to ensure sanity.

Reacting to these comments in a tweet, Mr Anyidoho is a former Director of Communications at the Presidency under the Mills administration said “Very relevant portion of the NDCs constitution: facts are facts! People should drop the hubris and speak to the NDCs constitution.

“Truth shall ALWAYS triumph over lies!!! If Samuel Ofosu-Ampofo is scared of upholding the NDCs constitution; he can respectfully step aside.”