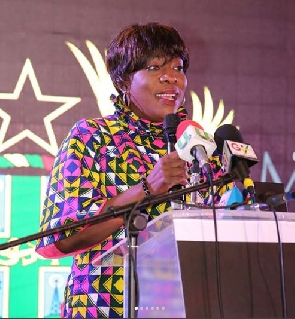 The immediate past Minister for Tourism, Culture and Creative Arts Madam Catherine Ablema Afeku who was last week relieved of her duties at the Ministry in a reshuffle by president Nana Addo Dankwa Akufo-Addo, has broken her silence about the new changes, MyNewsGh.com reports.

Reports from the grapevine had suggested her new portfolio was a demotion in view of the fact she was going to work under someone who is already a minister with another school of thought claiming she had resigned out of anger.

Whereas others were also of the view she has literally become a Deputy Minister to the Senior Minister among others, she disagreed and revealed that she is happier with her new appointment to work with the Mr. Yaw Osafo Marfo she regards as a senior in terms of governance.

Speaking on Kumasi-based Nhyira FM monitored by MyNewsGh.com’s Syxtus Eshun, Mrs Catherine Afeku stressed that she is happier now than ever with her new position contrary to claims she is embittered and had already tendered in her resignation letter.

According to her, working with Mr Asafo Marfo is a great deal that will allow her to gain lots of experience considering his wealth of experience as a former Finance Minister, Education and other positions he occupied before assuming his current position.

“I am very happy to work with Mr Osafo Marfo”, she said.

Mr Asafo Marfo in her view, has tons of experience in governance which she will be able to learn and gain experience from as she works under him at the presidency.

Madam Catherine Afeku also praised President Nana Addo for the opportunity saying the president has taken a very good decision of not giving up on his young appointees and grooming them to give off their best in governance deliver to the betterment of the country.

“This is a very, very intelligent move by the president to groom up and coming people in his government” Madam Catherine Afeku noted.

The tenure of Mrs Afeku as Minister for Tourism, Culture and Creative Arts during was characterized by series controversies with some industry players claiming she was bereft of decisions and policies concerning the creative arts.

Prior to her reshuffle some radio presenters and creative arts players had already called for the president to fire her as minister because they believed she was economical with the truth on government policies.