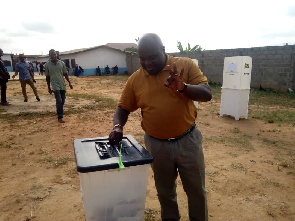 Julius Debrah casts his vote in the Suhum constituency

Former Chief of Staff, Julius Debrah, this morning cast his vote in the Suhum constituency.

The National Democratic Congress (NDC) today in all the regions are voting to select a leader for the 2020 Presidential Election.

While voting is progressing smoothly in most parts of the country for the National Democratic Congress (NDC) elections to elect a flagbearer, there appears to be trouble in the Ningo Prampram Constituency in the Greater Accra Region.

Adom News reporter, Isabella Gidiglo has reported that voting was yet to start at the designated polling station almost two hours after voting has started across the country.

The situation, according to her, has resulted in agitations from anxious delegates who are beginning to be impatient.

Seven stalwarts are ready for the faceoff to receive the endorsement of delegates in the election, to be held at the constituency level across the nation.

This is the fourth time the NDC is setting the stage for a competitive selection of a flag bearer as the party’s candidates for the 1992, 1994, 2000 and 2016 were selected through popular acclamation.

All aspirants, after going through the vetting process successfully, intensified their campaign throughout the country to convince the delegates to give them the chance to lead them, in their bid to unseat the ruling New Patriotic Party in the 2020 Election.

The primary was rescheduled from Saturday, January 26, 2019, over an injunction filed by two of its members with regard to the guidelines of the conduct of the poll, but the matter was later settled out of court.