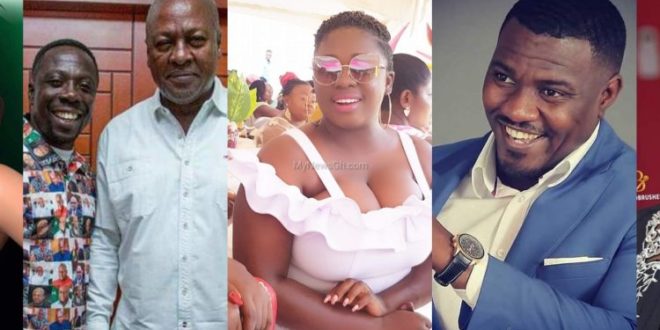 Aide to former President John Mahama has said contrary to the opinion of former Deputy General Secretary of the NDC Koku Anyidoho that celebrities will no longer play roles in NDC campaigns, she believes there is the need for a “fair balance”, assuring there is still room for celebrities who would want to campaign for NDC in 2020.

According to her, while Mr Anyidoho may have genuine concerns due to the manner some of the celebrities were deployed in 2016, she still believes there is room for them in 2020.

Koku Anyidoho had said about one million voters did not vote for the NDC because of the strategies and personalities the party employed for its campaigns, particularly celebrities.

The former Deputy General Secretary was speaking to some journalists in Accra, warning that the party shall not use the same tactics in the 2020 elections.

She was speaking on Metro TV Good Morning Ghana.

“It is always important to a good balance and fair balance and of course I think when it comes to messaging we will have for messages for everybody for the theatre, for the acts, for the music industry and what have you they serve as a key components of our country.” she explained.

“They are very big exporters of our tourist attraction, they also present our culture to the people who don’t live here, they act all these movies they write many books, they tell so many stories, they are actually very critical partners of stakeholder in our development journey” she added.

“For that matter, I think in all political parties, you will find them but I am sure …..yes everybody is entitled to their opinion.Maybe there are criticisms of how some were deployed as some point or the other but remember that we have many key activists.”

“So I think there is room for everybody irrespective of what aspect of the politics they want to play and I think that in as much as we may have lawyers, we have teachers, and what have you, progressives normally relate better ….. So I think that he may have some concerns or made some observations because of course in his capacity as a Deputy General Secretary, he may have been previewedto certain things we may have not known”.