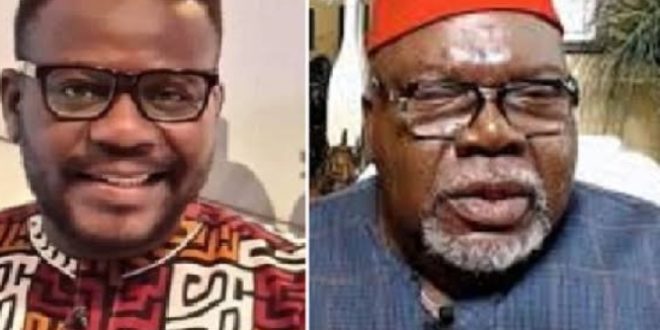 Johnnie Hughes’ three questions,TD to T.D. Jakes over ‘poor Ghana’ he visited in 2015

Passes verdict of a poverty-stricken Ghana as at 2015

Akufo-Addo billed to speak at Jakes’ church event in March

TV3 Morning Show host, Johnnie Hughes’ editorial slot on the New Day programme continues to gain popularity because of the issues and presentation style that he employs.

It serves as a platform on which the host asks questions of those in government and of the governed, touching on every day issues and looking back at what was and vetting promises of the political class.

Earlier this week, the host had cause to take on an international figure who waded into local political and developmental issues.

American preacher, Bishop TD Jakes became the center of Johnnie’s bite when a viral video captured him (the Preacher) showering praise on President Akufo-Addo and recalling a poverty-stricken Ghana in 2015, when last he visited.

Jakes spoke of a Ghana that had people wearing tattered clothes, a Ghana with few roads and few hotels, but that since taking office in 2017, Akufo-Addo had transformed the country into one of the wealthiest on the continent.

Within his analysis of the said video, Hughes had cause to pose three crucial questions to TD Jakes especially in the area of his claims about a poor Ghana seven years ago.

Johnnie’s questions were as follows:

2 – Are you suggesting that seven years ago when you came to Ghana, we were all wearing meagre clothes?

3 – Did they tell you that our president in travelling to your place to come and speak to your people will be coming in a hired jet?

In his concluding remarks, he entreated the Preacher to go and revise his notes and the data he had depended on to make most of his claims.

According to the Bishop of Potter’s House, a non-denominational American megachurch, when he first travelled to Ghana less than a decade ago, “there were a lot of dirt roads and people just in meagre gear … and very few buildings and nice hotels.”

But “seven years later, I came back and there were interstates, highways, hotels, five-star accommodations, restaurants everywhere.”

“There’s nothing like great leadership”, the televangelist observed while noting that President Nana Addo Dankwa Akufo-Addo has turned Ghana into one of Africa’s “wealthiest” countries.

Bishop Jakes made these comments while introducing the Ghanaian leader to his audience as one of the speakers for his upcoming summit on leadership.

The American preacher noted: “I have, for some time, watched with amazement, the president of the Republic of Ghana and the Commander-In-Chief of the Ghana Armed Forces, His Excellency Nana Akufo-Addo, will speak at our International Leadership Summit this month.

“And, in case you are not up to speed on how things are going in Africa; Ghana is one of Africa’s wealthiest countries; he [President Akufo-Addo] has completely turned it around.

“It is the largest producer of gold on the continent and the world’s second-largest producer of cocoa”, Jakes explained, adding: “Under President Akufo-Addo’s leadership, Ghana has emerged as a booming tech centre – even welcoming Twitter. [Twitter] is moving to Ghana. Africa’s corporate headquarters of Twitter is going to be there”, he mentioned.

Aside from that, T.D. Jakes said: “President Akufo-Addo is also working to transform Ghana into key travel destinations, particularly for Americans but particularly, for African-Americans and the African diaspora and aggressively promoting investment in the country.”

Over the last couple of years, he told the audience, “Ghana’s government has set aside 500 acres of land for foreigners looking to resettle there”.

“Let me explain to all of you African-Americans – Ghana’s move to embrace African-Americans has particular significance because some of the largest ports of slavery [were] from Ghana and, so, the return home and some of the amenities that he’s extending [are] a step toward healing and restoration,” Jakes explained.

He continued: “Imagine the prodigal son coming back home and the father running to meet him and welcoming him back home. It has tremendous significance and he’s done some amazing things in that regard.

“We’re thrilled, delighted to welcome President Akufo-Addo and several other esteemed leaders to the next International Leadership Summit.”

Previous Popular Nigeria actor details how he lived 3 days after being kept in a morgue
Next A/R: woman, 60, found dead with head decapitated, other parts of the body missing