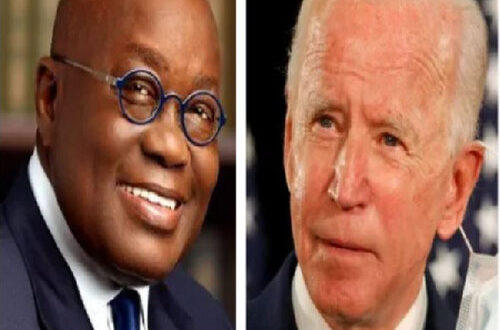 Despite his unflinching loyalties, President Akufo Addo has been totally ignored by the new US President Joe Biden, when he invited 40 world leaders to a climate change summit.

The virtual summit will be held on April 22 and 23 and would be live-streamed for public viewing and President Akufo Addo who position as the current Chairman of the Economic Community of West African States (ECOWAS) should have given him a pass, would, unfortunately, be one of the backbenchers who would only get to watch his colleagues from the sidelines. Through a computer screen.

Presidents of Kenya, Nigeria, South Africa, the Democratic Republic of Congo, and even Gabon was invited, by the Ghanaians President who also doubles as the UN Sustainable Development Goals Co-Chairman was completely ignored.

President Ali Bongo Ondimba of the tiny African country called Gabon, President Muhamadu Buhari of Nigeria, Uhuru Kenyatta of Kenya, Cyril Ramaphosa of South Africa and H.E. Félix Tshisekedi of the Democratic Republic of the Congo were all given VIP passes, while Ghana’s President will be left out of the show.

According to the White House, “…The President also invited the heads of other countries that are demonstrating strong climate leadership, are especially vulnerable to climate impacts, or are charting innovative pathways to a net-zero economy.”

“President Biden took action his first day in office to return the United States to the Paris Agreement. Days later, on January 27, he announced that he would soon convene a leaders summit to galvanize efforts by the major economies to tackle the climate crisis,” Biden’s White House said in a press statement on its website.

“The Leaders’ Summit on Climate will underscore the urgency – and the economic benefits – of stronger climate action. It will be a key milestone on the road to the United Nations Climate Change Conference (COP26) this November in Glasgow.”

During the Summit, the United States will announce an ambitious 2030 emissions target as its new nationally determined contribution under the Paris Agreement.

In his invitation, President Biden urged the invited leaders to use the Summit as an opportunity to outline how their countries also will contribute to stronger climate ambition.

The Summit will reconvene the U.S.-led Major Economies Forum on Energy and Climate, which brings together 17 countries responsible for approximately 80 percent of global emissions and global GDP.

A small number of businesses and civil society leaders will also participate in the Summit.