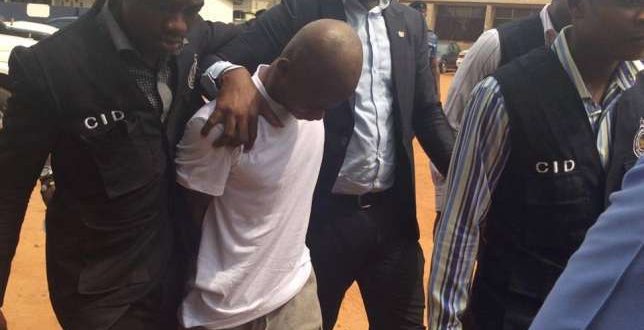 Augustine Obour, Lawyer for Daniel Asiedu, the self-confessed killer of the late Abuakwa North Member of Parliament Joseph Boakye Adu Danquah has withdrawn his services from the case.

Lawyer Obour who was appointed by the legal aid to represent Asiedu and one Vincent Bossu who is on the charge of abetement has been representing the accused persons since 2016.

He has however been absent from court since the covid-19 pandemic broke out and after three orders from the court, he finally surfaced.

In court on Friday, November 27, 2020 when the case was called, lawyer Obour was present in court.

When the case was called before the Criminal Division of the Accra High Court presided over by Justice Lydia Osei Marfo, Lawyer Obour said public pronouncements by the accused person means he cannot continue to represent them.

“I have a statement to make and I want to be on record. Respectfully my Lord, I used to appear before this court differently constituted as counsel for the accused persons.

“We worked until the ruling in respect of the Medical Doctor who examined First accused person (Daniel Asiedu) upon an order of this court,” he said.

He said “This matter was adjourned as a a result of the Covid-19 pandemic. We were to be informed of the next date the court is sitting. It was only about three weeks ago that I have had a hearing notice inviting me to appear before you for proceedings involving the accused persons to continue.”

He added that “I have duly appeared per the notice attached to the hearing notice.”

Lawyer Obuor said “I want to state that I have personally read and seen a video of first accused making statements regarding the admission of the crime charge to the whole world including the jurors who are going to trial this case.”

According to to him “I therefore find it difficult to defend this matter when he has told the whole world and jurors of the crime charge.

“I have read the laws and say accused standing trial shall not plead guilty to the hearing of of the jury. I therefore finds it difficult to comprehend the circumstances of the first accused person for the jurors to make a decision.

“I’m sincerely worried about this situation couple with the fact that the nearly four years now no High Court is ready to grant first or both two of them bail to enable me have conference with them,” he told the court.

Lawyer Obuor said, “Out of the cumbersome proceedings available for our office to meet with Accused persons.”

“I humbly wish to state that I will not be able to represent the accused persons in this matter from this morning. Even though the matter was handed to me by Legal Aid, I wanted to do my best to do justice in this matter,” he noted.

I disagree with you

Responding to the submission of Lawyer Obour, the court presided over by Justice Marfo said, even though “I respect your decision,” the court disagree with some of the reasons stated for the withdrawal.

“In the first place, we are in an era of vibrant social media where anybody that come to this case is put in the public domain,” she said.

The court said “we cannot have control over that and we know as lawyers that those public sentiments, opinions and emotions do not establish prima facie case against them unless prosecution established onerous burden on them until they are able to put out a cogent and incontrovertible evidence before the court.”

The court added that, “the jurors are yet to be empanelled and nobody has any idea who they will be. ”

The court explained that, “as soon as they get empanelled, the court warns them of their duties, that is, abandoned any stories they may have heard or may be hearing in the cause of the trial and concentrate attention only on evidence prosecution will be leading in the course of the trial.”

While granting the request of the lawyer, the court said “On this note counsel of accused Augustines Obuor is finally discharged from his representation of accused persons.”

The court has therefore directed the Registrar of the Court to let the regional director of the Legal Aid be notified by a letter with the court note for her to appoint another legal representation for the accused persons from her outfit whether from within or outside.

The registrar was also directed to ensure that there is a pool of jurors available in court for them to be empanelled at the next court sitting.