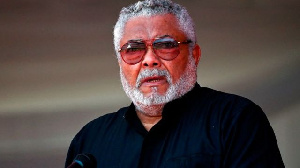 Former National Women of the National Democratic Congress (NDC) Anita Desoso says the Ewe Chiefs and family of the late former President of Ghana Jerry John Rawlings have decided not to be involved in his funeral because they were disrespected by Nana Konadu Agyeman Rawlings.

According to her, Nana Konadu Agyeman Rawlings did not involve them in the organization of the funeral of their father and for that matter, they decided not to be involved in the final burial rites of the founder of modern Ghana.

She made this known when she spoke to Accra-based Adom FM in an interview monitored by MyNewsGh.

Anita Desoso said “we have left the funeral for Nana Konadu. You will realize that the Ewe Chiefs have decided not to get involved because they were disrespected. They were supposed to have organized meetings. The traditional leaders should have come there and there will be traditional display under the funeral of the late former President.”

“Nana Konadu is just a wife, the ewe people are supposed to be leading this funeral and directing her as to what is supposed to be done. But she has disregarded the family and is doing what she wants.”

Previous LIVESTREAMING: Ghanaians bid final farewell to Rawlings
Next I was innocent and you were streetwise – Konadu recalls in tribute