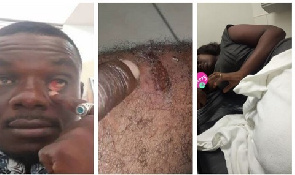 The Minister for the Interior, Mr Ambrose Dery, has apologised to three journalists of the Ghanaian Times who were brutally assaulted by three police officers last week.

“On behalf of my ministry, I want to apologise for whatever actions of those in my sector agency might have done to you”, Mr Dery told journalists on Wednesday, 20 March 2019, adding: “We are all about freedom of expression”.

Meanwhile, the Inspector General of Police has ordered the immediate interdiction of the three police officers.

Malik Sulemana and Raissa Sambou together with their driver were assaulted by the officers around Kinbu in Accra after one of the officers who was riding a motorbike hit the journalists’ car and sped off.

A statement issued by the police administration, signed by ACP Mr David Eklu, the Director-General of Police Public Affairs on Wednesday, 30 March 2019, named the officers as Inspector Isaac Opare of the Ministries Division, Accra; Sergeant Ebenezer Akrofi of the Accra Regional Police Headquarters; and Lance Corporal Evans Kofi Ntim of the Police Visibility in Accra.

“Additionally, the Police Professional and Standard Bureau (PPSB) has also been directed to look into the conduct of the Police officers who were on duty at the Ministries Police Station when the incident was reported.”

“The public will be updated on the progress of Police action taken,” the statement added.

Sergeant Ebenezer Akrofi is said to have carelessly used his unregistered motorbike to hit a vehicle belonging to the Ghanaian Times newspaper near the Kinbu Traffic Light in Accra on Thursday, 14 March 2019, after allegedly jumping traffic.

The front bumper and side mirror of the Nissan vehicle was broken as a result of that.

The three journalists from the Ghanaian Times who were on their way for the day’s assignment were in the vehicle at the time of the incident.

Two of them, Malik Sulemana and Raissa Sambou were physically brutalised for engaging Sergeant Akrofi on the accident and attempting to film the incident and exchanges.

The police officer reportedly used his elbow and fist to punch the tummy of Raissa Sambou, a nursing mother who gave birth in December through surgery (cesarean) and was rushed to the emergency unit of the Ridge Hospital after she collapsed.

Malik, who was thrown into a police cell for close to four hours at the Ministries Police Station, received medical attention later at the Cocoa Clinic.

The third journalist, a Senior Assistant Editor, Salifu Abdul Rahman, was also heckled by the men in uniform with threats to confiscate his bag and phone.

Narrating his ordeal, Malik said after Sergeant Akrofi hit the Ghanaian Times vehicle and sped off with his motorbike, a pillion rider who saw what happened tried to stop him, but the policeman rode on.

The Times driver chased and managed to block the policeman around Kinbu Traffic Light junction, he said he got off the vehicle and started videotaping which the policeman detested and attempted to snatch his phone.

Angered by the development, Malik said the policeman punched his face resulting in blood gushing out through his nostril.

Other policemen and a soldier in uniform joined in pushing, kicking, slapping punching, insulting and head-butting him, he added.

During the melee, he said his phone was taken on the blind side of the policemen by Raissa and handed over to the driver.

After searching for the phone without success, he said he was handcuffed and bundled into a police vehicle and sent to Ministries Police Station.

“They ignored my plea to them to send me to the hospital for medical attention. While lying almost motionless in the police cell, they brought me out and dragged me on the staircase to an office on the second floor. They dragged me back into the cell and urged the inmates to beat me up when I insisted to write my statement only in the presence of my lawyer,” he narrated.

While in the cell, he said the policemen boasted that “journalists only make noise when they are assaulted and that this one too shall pass”.

Malik said his pain reached an excruciating level when one policeman at the counter who goes by the name S. Nukunu, hit him on the back several times.

He said he was brought out of the cell and issued a police medical form after the Editor of Ghanaian Times, Mr David Agbenu and News Editor, Matthew Ayinne Ayoo went to the police station in the company of Assistant Commissioner of Police (ACP) David Eklu, Director of Public Affairs, Ghana Police Service and Deputy Superintendent of Police (DSP) Effia Tenge, Greater Accra Police Public Relations Officer.

Confirming the narration by Malik, Mr Rahman said the policemen were unruly and were determined to assault the journalists despite pleas from members of the public to stop it.

He noted that he was compelled to rush Raissa to the hospital to avoid any unfortunate consequence.

A motor rider who witnessed the incident, Xornam Jiagge, corroborated Malik’s account of the incident adding that the military man, who was not part of the police team, only joined the men to beat the journalists because he thought the police were under attack.

Previous Police arrest man who slaughtered his brother
Next Makola in the Court premises; E-Justice in crisis