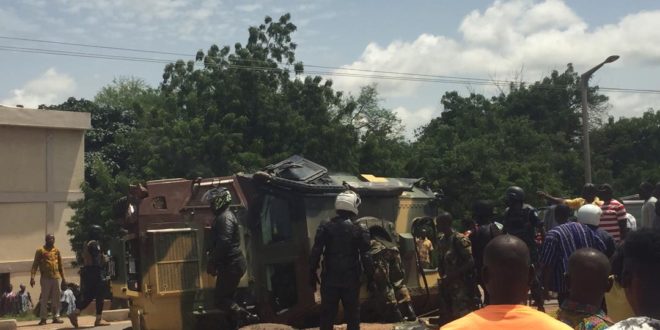 The Minister of Defense Hon. Dominic Nitiwul has visited the injured soldiers who were involved in a military armored vehicle crash on Thursday October 8, 2020.

Hon Dominic Nitiwul was seen conferring with President Nana Addo Dankwa Akufo-Addo at a public event in Paga in the Kassena Nankana West District and soon after the national anthem, he left for Bolgatanga where he went to assess the state of the injured military men.

Sources close to the Presidency told MyNewsGh.com that the Minister was directed by the President to ensure that the victims are given the best of medical care at the facility.

“The President directed the Defense Minister to cut short official activities with the team and dash to Bolgatanga in order to take care of the injured soldiers. He specifically told him that the welfare of the injured was as important as the official tour which is why he has to leave”, our source revealed.

Meanwhile, five of the injured soldiers are doing well at the Bolgatanga Regional Hospital where they are on admission receiving treatment.

MyNewsGh.com earlier on Thursday occupants of an armored military vehicle sustained various degrees of injuries after they were involved in an accident in Bolgatanga, the Upper East Regional capital.

The accident involving the armored vehicle commonly referred to as MOWAG and another light arms police vehicle MyNewsGh.com gathered, was said to be part of the President’s convoy heading to the Bolgatanga Regional House of chiefs on the Bolgatanga-Navrongo highway.

Local reports available to MyNewsGh.com suggest that the MOWAG was collided head-on with the police vehicle and somersaulted as it tried to catch up with the pace of the presidential convoy.

The injured were immediately rushed to the Bolgatanga Hospital.