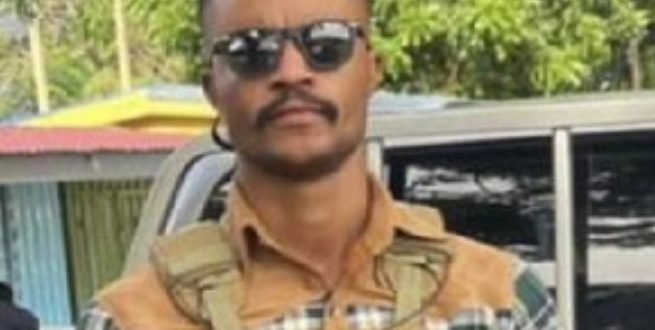 Share
Nyame was involved in a motor accident – Girlfriend

They turned our house upside down – Sedem

The girlfriend of one of the slain policemen who was implicated in the bullion van attacks case, has narrated her last days with her late beloved.

Sedem, as she is known as, said the late Lance Corporal Stephen Kwaku Nyame had been on admission at the hospital when one night, some policemen came around and accused him of being implicated after investigations into the bullion van attacks.

Speaking to Kofi Adomah Nwanwanii and monitored by GhanaWeb, she said her boyfriend was immediately cuffed, while she was asked to excuse them in the room.

“In December he had a motorbike accident on his way from work at the Police Headquarters. He was riding himself although the bike wasn’t for him but the person gave it to him with the assurance that being a policeman, he could give it out somebody who could use it to work and then pay him for it. And even though we are still looking for someone, he used to ride it to work whenever he wanted to beat traffic.p

“He used to have bigger motorbikes of his own but due to hard times, he sold all of them.

“On Wednesday, March 2, 2022, which was also his birthday, and just around midnight, some people came to his bed and said they were from the PID and that they were conducting an investigation where some suspects had mentioned his name as an accomplice. He was immediately handcuffed to the bed and it got me very worried,” she said.

Sedem continued that the policemen then discouraged her from calling anybody, after which she was driven to their house for a thorough search of the place.

“I was asked to step out until they were done. I was waiting outside when one of the investigators told me not to call anybody at that hour. I just told him I didn’t have anyone to call but then another said that if he were me, he would have handed over the phones to the police so that he would not be tempted. I obliged and gave out my phone, including Stephen’s.

“I was then asked to sit in the car and then told to lead them to our residence and I did. There, they thoroughly searched the placed until they found nothing and then they sent me back to the hospital. By 10 am, he was discharged but he was still in the handcuffs, with a policeman stationed beside him,” she added.

She also explained all the processes that followed from then, until when she returned the following day to meet her boyfriend still in the custody of the police.

She however explained that she got an assurance from him and that was one of the reasons she kept her faith in the process, hopefully praying that her man would be vindicated soon.

“The policeman then told me to follow them to their office: I was still carrying the pillows and cloths he slept on at the hospital. I sat waiting for them at the office from then till 4:30pm, without even a bath until one of the officers came to ask me to leave because I had waited for long. He also gave me his contact to call him should I need it and then I went to get malt and water for Stephen and I left. I hadn’t heard from him but I also wasn’t sure when to call back since I didn’t want to come across as being too desperate. Besides, he had personally assured me that he would be alright because he was with his own people; the police.

“In the morning around 6am, I called the officer and asked if I could come over to see him since I had not heard from them. He said yes, and that I should bring him food when I come. I got him tom brown with bread as he had to take his medication.

“He was only able to take a little of the food and then I asked him what the issue was. He told me it was a robbery case and that a suspect had mentioned his name. I asked him if he was involved and he assured me he had no hand in it. I reassured him that if he indeed had no hand in it, then God will see him through it,” she narrated.

Watch the rest of her interactions here. Start from 2:06 minutes:

Two policemen named in the recent bullion van robberies in Accra have been shot dead.

They were shot during a raid at Borteyman near Ashaiman on Tuesday (March 8, 2022).

Five other suspects in the bullion van robberies, four of whom are also policemen have been arrested and interdicted.

A statement from the police said the robberies occurred at Kingsway in February 2021; Baatsona (Spintex) in March 2021; Jamestown (Adedemkpo) in June 2021 and an attempted robbery at North Kaneshie (Industrial Area) in February 2022.

Two of the men implicated were L/Cpl Nyame and Constable Reindolph Gyimah Ansah but a subsequent statement from the police indicated that the two, while leading the team to a hideout, were caught in a crossfire, causing them their lives.

Investigations are still ongoing, the police have said.

You can also watch the last episode of The Untold here: