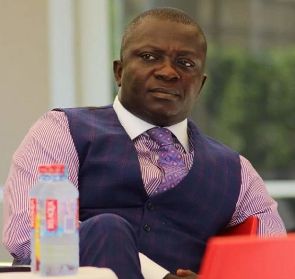 Minister of State in Charge of National Security, Mr. Bryan Acheampong has vowed to screw the stupidity from the Ashanti Regional Communications Officer of the opposition National Democratic Congress (NDC), Nurudeen Abass.

The Member of Parliament of Abetifi constituency in the Eastern Region who weighed among six options in dealing with the NDC executive for peddling falsehood that a container load of AK47 assault rifles were imported by him, said he was also considering praying for him.In a post on his Facebook page sighted by MyNewsGh.com he said “What do you do to fools like this making categorical statements in the name of politics. Ashanti Regional NDC officer!

1. Get him arrested to prove his allegation.
2. Sue him for defamation

3. Mechanically remove the stupidity out of him

4. Continue to pray for him

5. Report him to the peace council

Following the trending social media story and pictures of a DAF Articulated Truck with registration number GT 9699 Y containing weapons on Friday, The Ghana Police Service assured that security agencies have physically examined the said truck and its contents and found them to be imported pump action guns covered by regular documentation authorized by the Ministry for the Interior and relevant agencies and they conform to the documents covering them.

The pump action guns in the truck a statement from the police added are authorised for private use by licensed persons, adding they are not the type of weapons used by state security agencies.

“Police investigation further shows that rightful port procedures were followed to clear the weapons and the importer is a licensed arms dealer authorized to import such weapons. Police further assures that police together with sister security agencies, will continue to be vigilant to ensure that the country is secured.

The public is also encouraged to remain vigilant and report suspicious activities to police for necessary action”, it concluded.