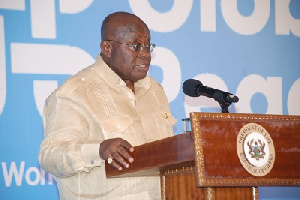 President Nana Addo Dankwa Akufo-Addo has assured captains of industry and the whole of corporate Ghana that his administration will stay focused on maintaining fiscal discipline and correct fundamentals for the economy in order to safeguard their interests in the country.

Addressing members of the 17th edition of the Ghana Club 100 awards at a dinner held at the Banquet Hall of the Jubilee House, President Akufo-Addo said the efficient management of the economy is at the heart of all that government and corporate Ghana seeks to do.

“It is the success of the economy that will guarantee the growth of the private sector and an improvement in the quality of life of our people. I believe we are all now agreed that the fundamentals have to be sound if the economy is to flourish,” the President said.

Touting the economic gains his administration has achieved since assuming office, such as signing off from the International Monetary Fund (IMF) deal in April 2019, increase of real GDP growth from 3.4% in 2016 to 8.1% in 2017, decline in the debt to GDP ratio from 56.6% of GDP in 2016 to 54.8% at the end of 2018, drop in inflation from 15.4% at the end of 2016 to 9.5% as at April this year, decline in interest rates and recorded surplus in the trade balance account of the country in more than decade in 2017, the President said, “These are good figures and we expect the impressive figures and good performance to continue”.

“It is essential that we never lose sight of the importance of maintaining fiscal discipline and the correct fundamentals on the economy,” the President said.

As part of the dinner, the President launched the 18th edition award of the Ghana Club 100 which will take place on Friday, November 9th, 2019, under the theme: “Sustainable Agriculture, the Bedrock of Ghana’s Industrialization Drive”.

“This theme is apt as it reflects government’s agenda of industrializing the economy through heightened agricultural productivity,” the President said. Government, the President further added, will do all within its power through its initiatives such as Planting for Food and Jobs, Rearing for Food and Exports, One Village-One Dam, One District-One Warehouse, as well as the One District-One Factory, “to put agriculture on the path of sustainability and transformation”.

Number One Company in Ghana

In a brief remark on behalf of the number one company of the 17th edition awards of the Ghana Club 100, Scancon Ghana Limited (MTN), Sam Addo, the General Manager, MTN Business, commended government for initiatives it has undertaken so far to boost the investment climate in the country.

He solicited for government’s support for their business by the releasing of spectrum at affordable price to the telecom sector as a stimulus for local e-commerce businesses, teaching, communication and affordable broadband in order to achieve government’s own digital transformation agenda.

Previous NADMO to disburse GH¢1.05 million to victims
Next Sad as police arrest seamstress for trying to use mother of 3 for RITUALS