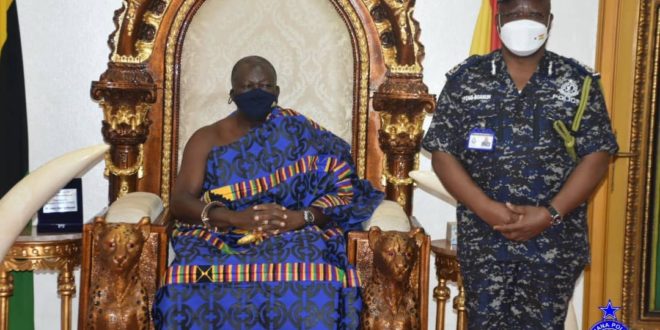 If civilians are purchasing small arms, it means they don’t trust you – Asantehene tells police

The Asantehene, Otumfuo Osei Tutu II has expressed worry about the proliferation of weapons in the country.

In a meeting with the Inspector General of Police (IGP), James Oppong Boanuah, the Ashanti overlord said it is a sign that the people have lost trust in the police

The IGP was in the Ashanti Region ahead of a police simulation exercise for elections.

“I read yesterday that there are a lot of small arms in the country. Why is that so? If it has gotten to a point that civilians are purchasing small arms for themselves then it means the people do not trust you,” he said.

He added, “You will have to consider that critically”.

The issue of weapons has become a threat to security as the general elections draw near.

The Executive Director of the Small Arms Commission Jones Applerh has said he is puzzled at the increased number of licensed revolvers and pistols owned by members of the general public.

He said this has heightened crime rate creating fear and panic among citizens.

Mr Applerh said for a Commission that is supposed to help stop the proliferation of small arms, it gets worrying and begs the question on why people would think it best to possess a gun.

In an interview on The Pulse with JoyNews’ Gifty Andoh Appiah, he said the 2020 statistics from the Ghana Police Service raises eyebrows.

From January last year to June this year, there has been an increased number of 74.4% people licensing revolvers and pistols in the country.

There have also been reports of killings with the latest being the Mfantseman MP who was shot to death by armed robbers on the Mankessim-Cape Coast highway last week.

The worried Otumfuo, therefore, charged the police to deal with the issue of proliferation of arms in the country.

He also charged the police to thoroughly investigate recent cases of insecurity in the country especially highway robberies.

The Asantehene said the ability of police to handle such issues will contribute to peaceful elections.

“You have been trained to investigate such matters. I entreat you to investigate all the issues. It is all towards ensuring peace in the upcoming election,” he said.

On his part, the IGP assured the public of heightened security throughout the period of elections.