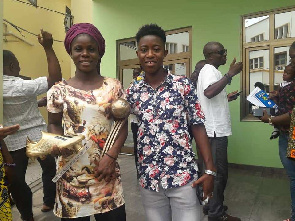 I was praying for the award to arrive – Mukarama Abdulai

Black Maidens skipper Mukarama Abdulai is elated following the arrival of the two awards she won at the 2018 U17 Women’s World Cup in Uruguay.

Abdulai won the Adidas Golden Boot (top scorer) and Bronze Ball (third best player) though Ghana exited in the quarterfinals after losing 4-2 to Mexico on penalties.

The budding attacker had to come home before his seven goals won her the golden boot whilst she was also adjudged the bronze ball winner.

“I’m very excited about the awards. I have been waiting for it. I didn’t had any hint on when it will be coming. I was really waiting for it. Finally, it came, I’m very happy.” She stated

“I was just thinking like when will the awards come. Because it been months since we finished the tournament but it wasn’t coming. I was waiting and praying it will come”

” It’s a very good thing and an encouragement for others. They just want to see the award as it is a source of motivation to them.”

The young goal machine who plays for Northen Ladies has already gotten scholarships to study in some American Universities after his stellar output on the World stage.

Previous VIGILANTE GROUPS: A plan to kill Zongo youths
Next SONA 2019: Akufo-Addo to ‘justify mandate, confidence reposed in him’