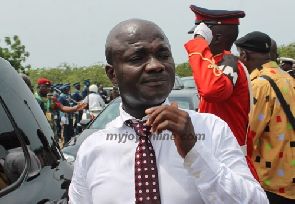 How I cheated death at NDC office – Appiah Stadium

A popular National Democratic Congress (NDC) serial caller, Frank Kwaku Appiah popularly known as Appiah Stadium has narrated how he escaped death during a fierce shootout, resulting in the death of one person at the Ashanti Region Office in Kumasi.

Speaking on Asempa FM’s Ekosi Sen show, Appiah Stadium said he nearly lost his life when escaping from the venue during the shootout.

He said when he arrived at the scene the attackers numbering about four had already been stationed in front of the party office with motorbikes and armed.

Appiah Stadium said he was in the party office for the resolution of some misunderstanding between Joseph Yamin and other party executives when the unfortunate incident happened.

“I run to the bush for cover and almost fell in a latrine because that was the closest for the situation to calm down. I was so scared when I got to the premises due to the presence of the macho men. I was working towards my Mahama 100% vote at the primaries and was called to the party office for the resolution of some misunderstanding between Yamin and other party executives” he narrated.

He continued that “I haven’t been to a war front before but what happened was more than a movie. I was even scared I could be shot from the bush because some of the men headed towards that side but I was hoping nobody will see me”.

He said vigilante groups formed by political parties for various reasons must be disbanded with immediate effect.

Appiah Stadium said he foresees “danger” ahead of the 2020 elections if the police do not take strict measure to “forcefully” stop all activities of these groups; both from the opposition NDC and the ruling NPP.

“From what I saw on Monday, I will urge the president and Mahama to come to terms and disband these groups else Ghana will burn. You need to be calm when even advising these people and if I should mention their names right now, I won’t be able to sleep in my house today” he added.