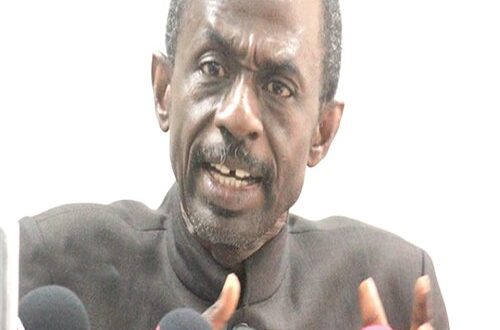 The NDC General-Secretary, Johnson Asiedu Nketia, has set a new course for the election petition that has been filed by his party’s 2020 flagbearer, John Mahama.

Testifying on behalf of the petitioner on Friday, the man popularly known as General Mosquito during cross-examination said the NDC is in court to challenge the conduct and constitutional duty of the Electoral Commission and not the 2020 election result.

“My Lord we are not in court to try to declare another presidential result by us [NDC], we are in court to challenge the performance of the constitutional duty of the first respondent [Electoral Commissioner] and to access whether that duty has been discharged faithfully,” he said.

Mr Mahama on December 30, 2020, filed a petition at the Supreme Court seeking to set aside the results of the election that went in favour of the NPP’s Nana Akufo-Addo.

Already, the NDC’s General Secreatary in his witness statement has alleged that the EC Chairperson, Jean Mensa was biased in the execution of her role relating to the December 7, election.

The outspoken politician claimed her bias stemmed from her “close familial relationship” with the wife of the second respondent, Rebecca Akufo-Addo.

And in his testimony insisted that this alleged bias by the EC Chairperson is contrary to Article 296 of the Constitution which requires public officers not to be biased.

But interacting with the media after today’s proceedings, a member of President Akufo-Addo’s legal team, Frank Davies described Mr Nketia’s attitude in the witness stand as being evasive.

“When Mr Johnson Asiedu Nketia took to the witness box, he remained largely evasive. Every question that was posed, his immediate response was that, I do not speak for the petitioner.”

“This is someone who in paragraph two of his witness statement has stated clearly that he was in court to lend aid to the petition filed by the petitioner, how can you, come to court as a witness to a party and when asked a question, you say, “I do not speak for the petitioner’”.