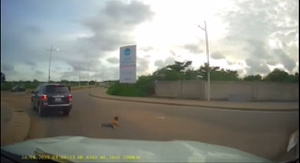 Parents urged to strap children when moving in cars

A video making rounds on social media has captured a rather extraordinary incident where a little boy was miraculously saved.

The video captured by a Facebook user, Mike Cooke shows the boy ‘flying’ out of a speeding Land cruiser vehicle from the passenger’s side.

Fortunately, the car driving behind them which appears to have captured the incident was able to hit the brakes abruptly to avoid crashing the little boy whilst other vehicles on the side, including a motorbike rider avoided the boy.

The woman driving the land cruiser, who appears to be the mother, immediately parks the car and rushes out to pick up her son who had stood up and was crying.

She sent the boy back into the car and after seemingly buckling him up, rushes off, with other drivers looking on.

The Facebook user who shared the incident together with the video said it happened at Lister Hospital around Airport. He further urged parents to be cautious and to always ensure their children are strapped by seatbelts before moving in a car.

Find the video below: